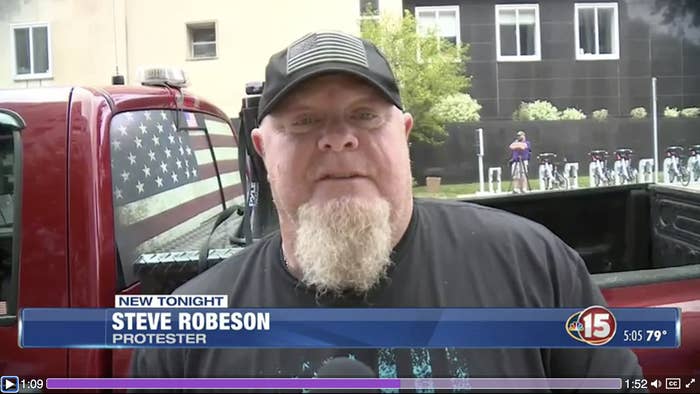 Even while he was assisting the FBI, Stephen Robeson allegedly used a fake charity to defraud a Wisconsin couple out of an SUV.

A key FBI informant in the Michigan kidnapping case has been charged with fraud, adding to the potential complications facing prosecutors in the high-profile domestic terrorism case.

The informant, Stephen Robeson, was charged last week in Sauk County, Wisconsin, with defrauding a couple out of an SUV by convincing them to donate it to an anti–child sex trafficking charity that did not exist, according to the criminal complaint. His wife, Kimberly Robeson, was also charged. Both face up to three and a half years in prison and a fine of up to $10,000 if convicted.

Robeson, who has multiple felony convictions and lives in Wisconsin, played a central role in building the criminal case against the alleged domestic terrorists accused in October 2020 of plotting to kidnap Michigan Gov. Gretchen Whitmer. The investigation resulted in six men being charged in federal court with plotting the kidnapping and eight other men in Michigan state court with providing material assistance to terrorism. Court records and interviews reviewed by BuzzFeed News show that Robeson, working at the FBI’s behest, recruited potential targets, organized meetings during which suspects were secretly recorded, and paid expenses for people to attend those events.

But just over four months after the takedown, prosecutors made the highly unusual move of indicting their own informant and charging him in federal court with illegally possessing a firearm, a .50-caliber sniper rifle he bought from an acquaintance from church just two weeks before the arrests in Michigan. Robeson eventually pleaded guilty in a deal that offered him time served and two years probation, an unusually light sentence that was far below sentencing guidelines for a recidivist felon.

The new criminal accusation against Robeson comes in state court and is not related to his federal gun charge. But like the federal indictment, it makes claims of illegal conduct even as he was still deeply involved in the Michigan probe and under the supervision of FBI handlers. According to the criminal complaint, he convinced a couple to purchase a used 2003 Chevy Tahoe and donate it under false pretenses to an organization he ran called “Race to Unite Races” that “helps combat child sex trafficking in Sauk County.”

An investigation by the Sauk County sheriff showed that despite Robeson’s claims to the contrary, the group “has never been registered as tax exempt or a 501c (nonprofit) organization by the IRS.” According to the complaint, the SUV was signed over to Race to Unite Races on Sept. 3, 2020 — nine days before Robeson participated in a nighttime surveillance of Whitmer’s lakeside vacation home.

A federal trial in the kidnapping case is scheduled to begin on March 8. Last week, prosecutors confirmed they would not be calling on three FBI agents at the center of the investigation to testify after one was charged with domestic violence and fired, a second was accused of perjury in a prior case, and a third was discovered to have incorporated a security business linked to an online troll.

Despite claims by the Justice Department that the issues with the agents were “irrelevant” to the case designed to “distract the jury,” defense attorneys have leaped on them as a part of their strategy to argue that their clients were entrapped by an FBI willing to overlook misbehavior by its own operatives in order to make a case at all costs.

Robeson’s criminal activities are likely to figure heavily in that tactic, and defense attorneys have said they hope to call him as a witness during the trial. On Saturday, lawyers for the federal defendants filed a motion to dismiss the case, arguing that “government agents and informants concocted, hatched, and pushed this ‘kidnapping plan’ from the beginning.”