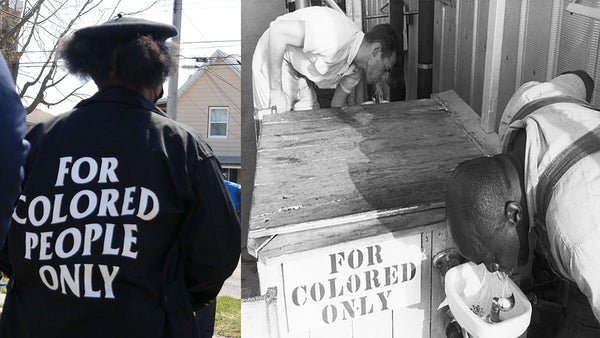 It’s very difficult to write about something that is so ignorant!

I was not welcomed by BLM / Antifa who allegedly supports unity.

LANSING — It’s been nearly a year since Anthony Hulon died in Lansing police custody and his sister and dozens of protesters want the officers involved held accountable.  Heather Hulon and about 60 people marched Saturday to the downtown Lansing Police Department, which houses the lockup where her brother died from asphyxia on April 11, 2020.

My honest impression of the majority of people there? A bunch of confused, snobby, self righteous people who are completely brainwashed by the media.

Speaking from somebody who has had the opportunity to experience racism first hand, being white and living on East 42nd Street on the East Side of Indianapolis. I was a minority and not only picked on, but received many ass whippings for my color and southern twang.

I was able to find some clips of the apartment complex (Sutton Place Apartments) directly across the street from where I used to live.

This is why I get pretty upset when I see a group of mostly White People (BLM / Antifa) who have never had the fortunate opportunity to grow up like I did. When I say fortunate, I mean it’s because I know the truth because I have lived it!

Here is the truth!  Are you ready?

All Races Have Racists!

Not all people are bad either.  Most people are good people who have good intentions and good hearts. But YES, there are bad people as well.

But the fact that classes have to be established according to race, wealth, religion, political view, sex, sexual preference and so on, only helps to contribute to A DIVIDED SOCIETY BASED ON CLASSES.

This is what the media constantly pushes.  And once you are aware of it, you can identify the schedule that is carried out daily on the news.

What is so wrong with supporting THE HUMAN RACE?

I was able to document my experience with the following videos

In this video I come across 1 group that was giving media interviews. Bethany is somebody I came to know and like after numerous previous encounters at Stop The Steal rallies and conservative rallies.  Bethany would be with the counter-protesters and showed she is one dedicated woman that you have to respect. We all gain a mutual respect for each other no matter our views, because in the end we are all the same, no matter how hard some may try to create labels to  divide us.

This video I find a 2nd group that is gathering to march to the capitol. Notice the uncomfortable looks and glares I start getting.

In this video I am interrogated and told “Keep your distance”

In this video I noticed a woman taking off her mask to inhale chemicals in a cigarette. Genius…

In this video, I am keeping my distance as instructed and a heckler comes up to question why I am not wearing a mask outside. He then starts to try and debate me about Science…

BLM / Antifa marching down Capitol Ave in Lansing Michigan. Notice the 3 cars that go around construction barriers and proceed to drive down the wrong way on a one way street.

BLM / Antifa / Boogaloo Boys at city hall and Chinese Conservative Party at the capitol all in the same location.

In this video I was trying to get footage of them marching out but was confronted by somebody who started bullhorning and blocking my shot. “UNITY”

2021-04-04
Previous Post: Hospital Demands Proof Of Vax
Next Post: Michigan Senate Bill 250 Will Give More Power To Shut Down State!