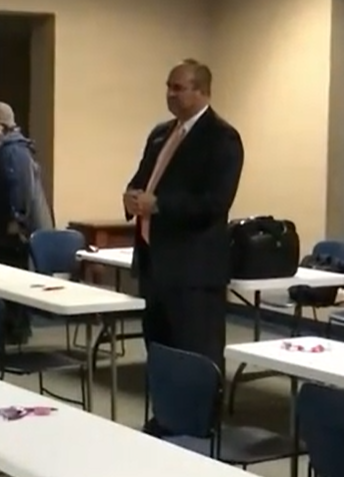 MACOMB COUNTY- At the GOP meeting this past week,  Anthony Forlini, the Macomb County Clerk, had a Q&A during their meeting. However, the meeting lacked answers from the clerk and left people with more questions. See the video below posted by Thomas A. Smith.

When asked about following the law with signature verification, Forlini answers, “We don’t do it.” He was also asked if he directs the county clerks. “No. We’re very decentralized, it’s all right there.” and later states that “Michigan is the most decentralized in the country.”

Constituent John Parkinson asked Forlini if he thought the 2020 election was stolen from Donald J. Trump, in which he replied, “Not in Macomb County it wasn’t.” This would require accountability, in which may people in positions of power lack here in Michigan.

Anytime the clerk lacked to provide answers, people were cut off by his assistant and would move on to the next question.

After the meeting adjourned, gubernatorial candidate Ralph Rebandt announced he’s in favor of a full forensic audit and will do away with voter machines. And stated Macomb County could be a leader in this, to have a citizen’s initiative in the county and move forward with this, as it could set a precedence for the entire country.

Michigan state representative candidate Mellissa Carone attended the meeting and wrote this up following the meeting.

Michigan voters arrive at a meeting frustrated, to make inquiries to their elected officials, only to get nonanswers, or no answers, and leave more upset than when they arrived.  Voters from around the country, much like those in Macomb County, continue to demand our elected officials perform a full forensic audit into the 2020 presidential election.  Michelle Smith brought Macome County Clerk Anthony Forlini in for a meeting with citizens after requests for the clerk to speak with voters for several months.

Forlini stumbled through his initial presentation before taking questions from voters.  When Mellissa Carone was given an opportunity to speak she cited an excerpt from Michigan Election Law Act 116 168.870 “Board of canvassers; investigation of recount.’

‘For the purpose of such investigation, the clerk, if no meeting be already appointed, shall call a meeting of such board of canvassers and the said board shall have power to issue subpoenas requiring the person in charge thereof to bring before it the ballot boxes used in the election precinct or precincts referred to in the petition, as well as the poll lists, tally sheets, statements of returns and such other documents or reports as may be deemed necessary.  Said board shall safely guard such ballots, poll lists, tally sheets and returns and when no longer required shall deliver them to the officials charged with the custody thereof.  Whoever, being so subpoenaed, shall fail to appear or shall fail to produce any such box, shall be deemed guilty of a misdemeanor.  The persons who are required to appear before the board of canvassers shall be paid the same fees and mileage as are paid circuit court witness in the county.  They shall be paid by the political subdivision before whose board of canvassers they appear.”

In summary, the law states it is the clerk’s responsibility to call a meeting with the board of canvassers to subpoena election materials to perform an audit.

Forlini’s response, as expected, was one of complete subversion.  Forlini stated it was the first time he had heard of such law, which was quickly disputed by many within the meeting, informing him that they had sent the law to him on several occasions with no response.  This was disappointing to the attendees at the meeting to say the least.   Many at the meeting, were reportedly upset that they were the ones informing their clerk on election law.  Several officials were derelict in their duties over the past year.

The entire meeting was much of the same we have become accustomed to since the November election.  Citizens are increasingly upset about the lack of action by our elected officials.  Forlini at one point, referred to how difficult following the law would be in this case.  Voters have been asking for this to happen since November, and election materials are retained for 22 months following the election, for this exact situation.

Many other answers were incoherent and attendees were cut off by the moderator Michelle Smith, if she even allowed the citizens to complete their question at all.

We need a forensic audit performed, the citizens will have to continue to demand it be done, in larger numbers and more frequently than we have been.  If we do not find out what happened in our 2020 election, and make corrections, then we will live through the consequences like we have over the past year.

** To volunteer or donate, please visit votecarone.com.   Any help is greatly appreciated, we must take our country back.  Thank you.