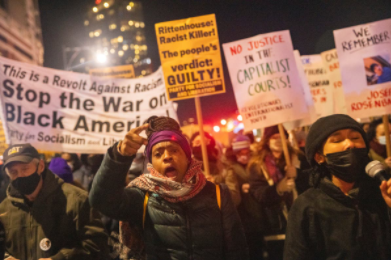 MICHIGAN- In a recent report by Us Against Media, students at Michigan’s most prominent university have been offered counsel for the distressing verdict of the Kyle Rittenhouse case. Students who are distraught can receive counseling through the university. The university is being shy about some aspects of the case however as discussed later.

We here at Us Against Media have reported on the fact that U of M is covering up it’s counsel to Democrat Governor Gretchen Whitmer. The college also mandated an experimental vaccine for it’s students with the assumption that the FDA would approve the drug. Furthermore the college doesn’t acknowledge the failure of it’s own law school.

In the email to students the college implies that the Rittenhouse verdict is a symptom of racism in our country. “Some may question whether or not the jury would have reached a different outcome if the defendant had been a person of color.” Disregarding the fact that they rob Kyle Rittenhouse of his own color (unless they assume he is paper white) the college totally fails to mention to it’s students that the lead prosecutor was a graduate from their university.

Thomas Binger led the prosecution against Kyle Rittenhouse and his performance was a sight to see. Having watched most of the trial I can say that his arguments fell flat time and time again. Not only were the arguments poor but the witnesses he called all bolstered the defense’s case. But what really should embarrass the university is the “grave constitutional violation” committed by Binger in the trial.

Judge Bruce Schroeder made the accusation of the University of Michigan graduate during testimony by Kyle Rittenhouse. “The problem is, this is a grave constitutional violation for you to talk about the defendant’s silence, and that is — and you’re right on the borderline, and you may be over it. But it better stop.”

Another problem is the mischaracterization of the incident and the court proceedings by the editorial board of the Grand Valley Lanthorn. Both colleges are hiding the facts of the trial from their students and misleading them to have a counterfactual view of the trial.

The board writes “Rittenhouse was isolated from his group and came across Joshua Rosenbaum, who approached Rittenhouse.” I want to give the Lanthorn editorial board the benefit of the doubt. It seems they did not watch the footage which shows Rosenbaum chasing Rittenhouse. “Approach” is clearly not the right word to describe the actions taken by Rosenbaum.

The editorial continues “But the judge and jury protected Rittenhouse, and set precedent. Young men can cross state lines, arm themselves and act as vigilantes— take lives— with limited consequences.”

The judge and jury protected Rittenhouse? For a professional and purportedly objective paper that is a wild take after the breakdown of the prosecution and footage. The Lanthorn may consider watching the footage and showing how Rittenhouse was not under attack.

Students that trust their universities to be objective in their analysis of facts like those in the Rittenhouse case are being misled. For example, a socialist group from Arizona State University protested Rittenhouse’s enrollment at their school, however he’s not a student enrolled in person and taking a few courses online. See their flyer below: 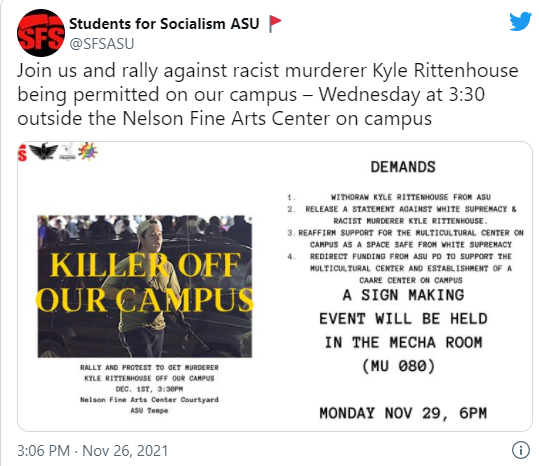 That may be the result of sloppy reporting on the part of the colleges and the Lanthorn trusting far left sources like NPR but either way the students are being led by the nose into leftism.