Transparency Issues and Mandates at Universities 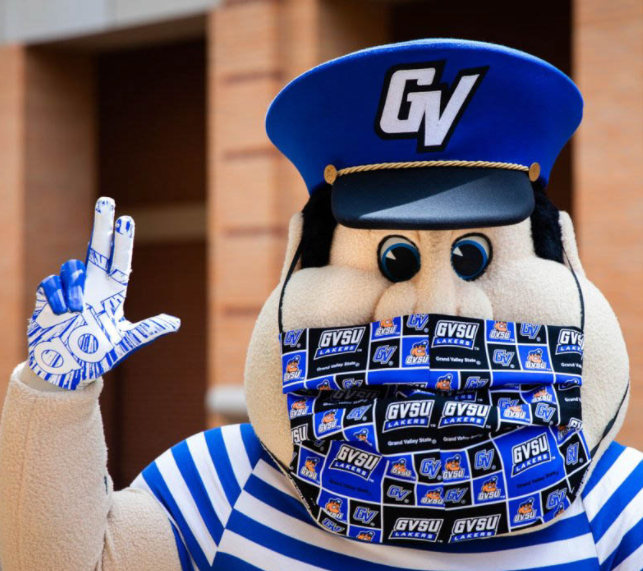 MICHIGAN- Universities have lacked transparency about what they were going to be requiring since the start of the 2021-22 school year. The most prominent university in Michigan, University of Michigan, was the first to demand that students take the then EUA (emergency use authorization) vaccine from either Pfizer, Moderna, or Johnson and Johnson. They mandated the vaccine at the end of July with just one month to the start of classes. Other universities soon followed suit. This may only be the beginning of the secrecy.

That same university that began the torrent of mandates has now been asked to reveal their advice given to Gretchen Whitmer about the initial shut down. The Governor of Michigan claimed that she used all the best science and data in order to make the decision to shut down the entire state. The same rationale was given to eventually arrest business owner Marlena Pavlos-Hackney for failing to shut down her restaurant.

According to an article by Tom Gantert of Michigan Capitol Confidential, the University of Michigan is working to prevent the release of records showing lockdown-related data and recommendations it offered to Gov. Gretchen Whitmer in March 2020. The Mackinac Center for Public Policy released heavily redacted email correspondence between the University of Michigan and the governor’s office that was requested via the Freedom of Information Act (FOIA). The Mackinac Center filed a lawsuit in May 2020 over the dispute. See screen captures of the emails they received. It’s pretty obvious they’re withholding information: 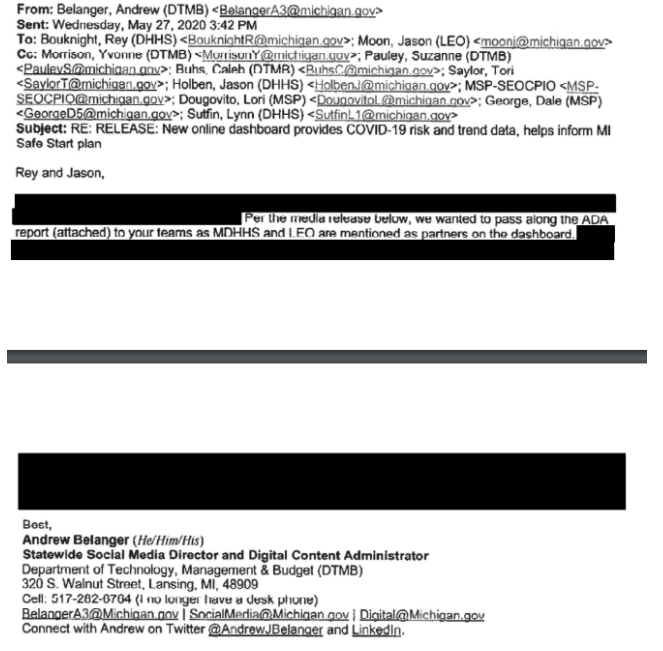 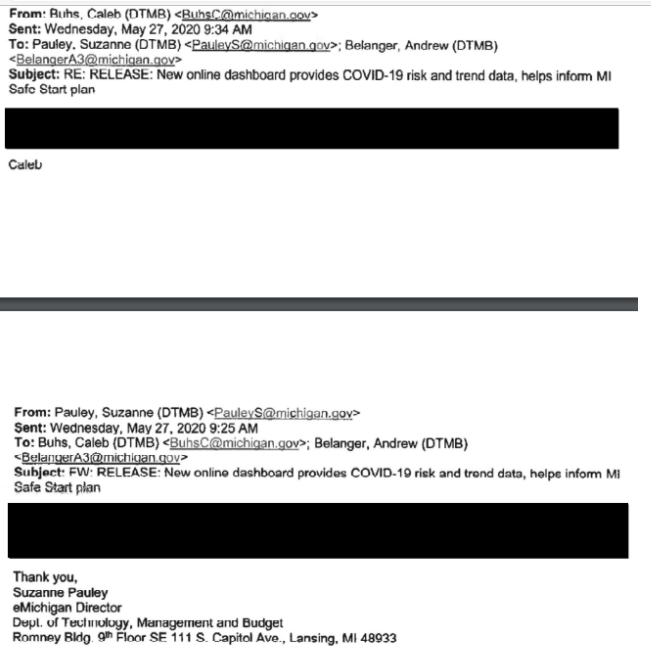 Now we have reports of waning efficacy of the vaccine from the CDC. What does this mean for college students as the winter semester approaches and cases are spiking in Michigan? Well we aren’t sure and neither is one university within the state of Michigan. In fact, they seem to have not even discussed the issue. When asked about the need for boosters for the winter semester, Dr. Ed Aboufadel, Associate Vice President for Academic Affairs and member of the Virus Action Team at Grand Valley State University (GVSU) responded, “At this point in time, there is no plan to require booster shots for winter semester. We haven’t even talked about it, although we are aware of the CDC’s rationale for a booster. I received my booster two weeks ago.” When asked if the university would commit to students that they would not need an extra dose of the vaccine, Dr. Aboufadel refused that commitment. 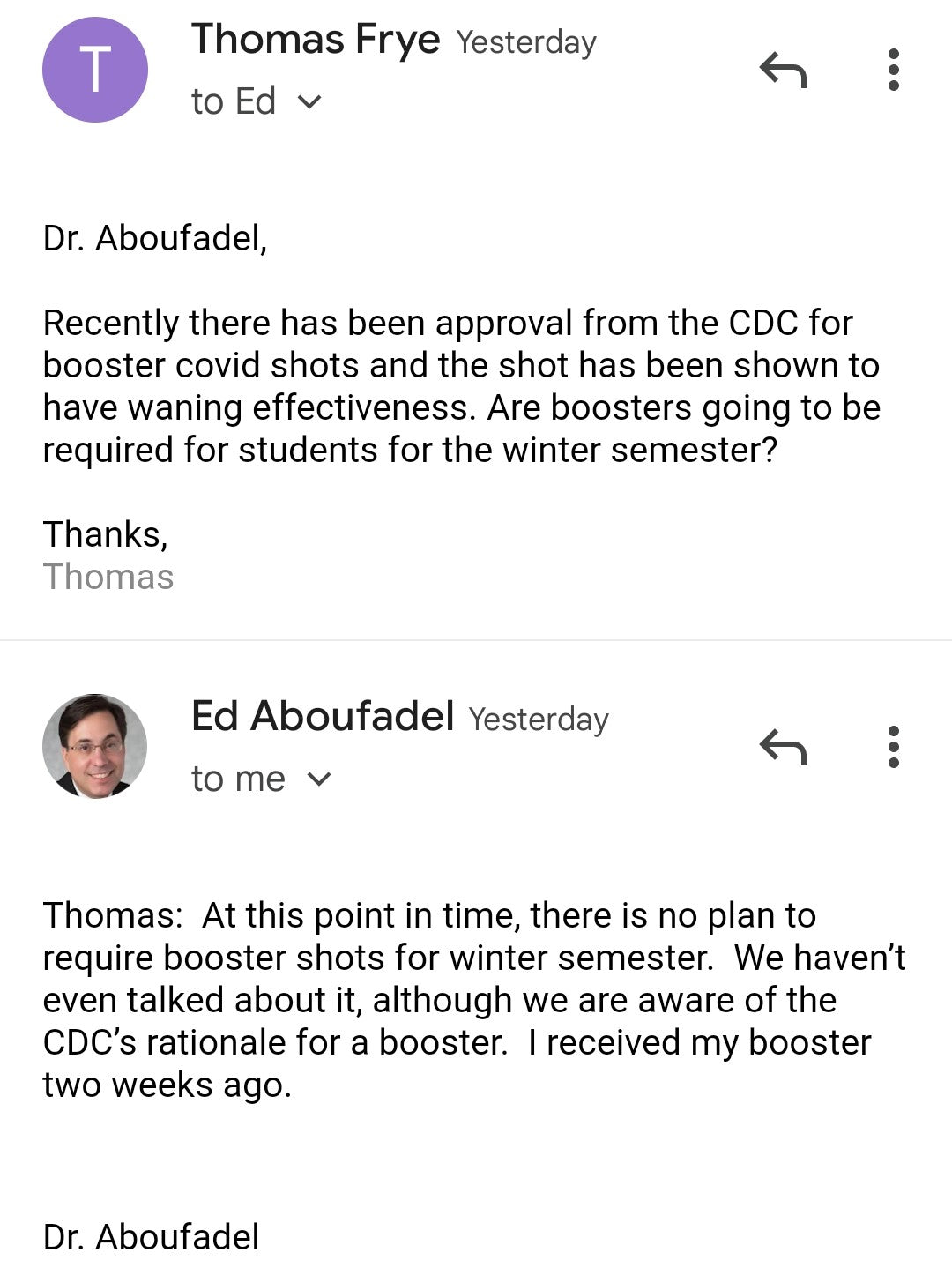 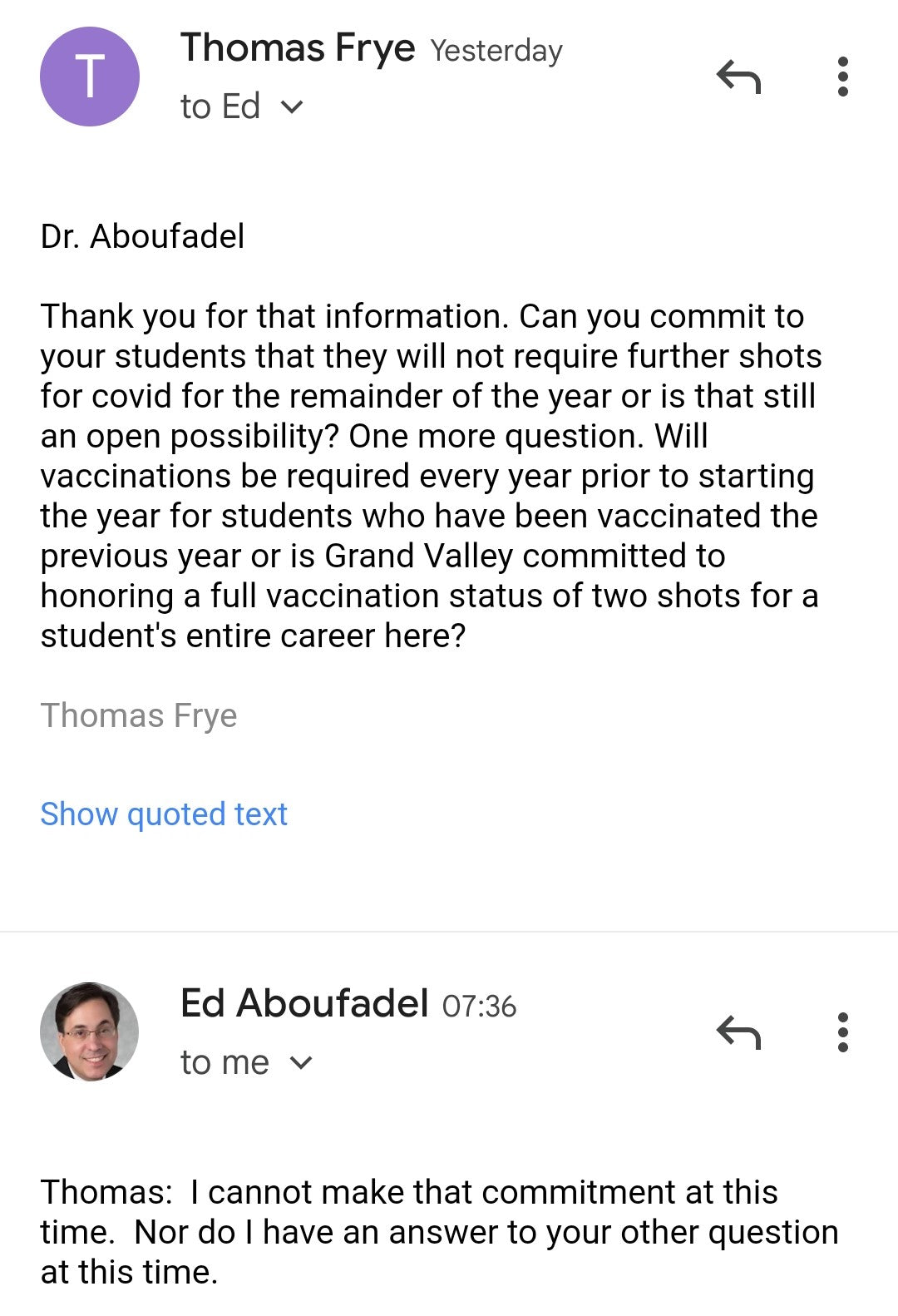 Furthermore, GVSU is unwilling to commit to the idea of one round of immunizations for students. When asked whether students would be forced to get a COVID-19 vaccine before each school year Dr. Aboufadel again stated “I do not have an answer.” Students may wonder if they will have to get the COVID-19 vaccine every year or even every semester. So far GVSU hasn’t seemed to have discussed it, but the fact that the vaccine seems to only protect the receiver for six months suggests that the GVSU may require it, at the very least, every year.

It appears that with the spike in COVID-19 cases in Michigan, colleges have the pre-established rationale to halt in-person classes and keep the mask mandates in place. When I asked Dr. Aboufadel to comment on the “alert level” of the campus and whether or not the governor’s office is making decisions for our community, his response is a little confusing. He states “as far as I know on the Virus Action Team, our discussions are internal.”

He then states in response to the alert level indicators, “The ones I would focus the most on are the number of cases per day at GVSU (currently near 20 cases, which would push it to Level 3) and the government regulation one.  For the latter, unlike last year, there are not any hard orders from the county or state to affect our functioning currently.  We moved to Level 3 last fall in conjunction with the Ottawa County’s stay-at-home order.  Will there be new orders from the Governor soon?”

While the governor isn’t directly in control of the universities, her opinion on the subject is of higher importance than many other indicators including vaccination rates on campus. Universities have all the justification they needs to raise the alert level. We still wonder about the “science and data” Governor Whitmer is using and hopefully U of M will release that data soon and we will see some justification of the measures taken by Grand Valley State University.

Photo taken from our coverage of the Michigan State Back to Campus Rally as Students protest mandates and demand in-person learning back in April of 2021: 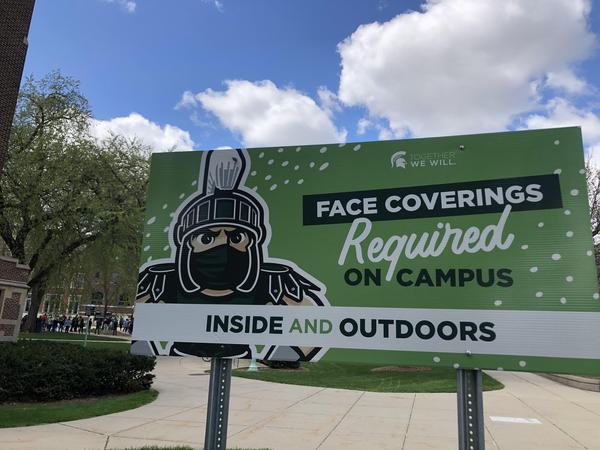