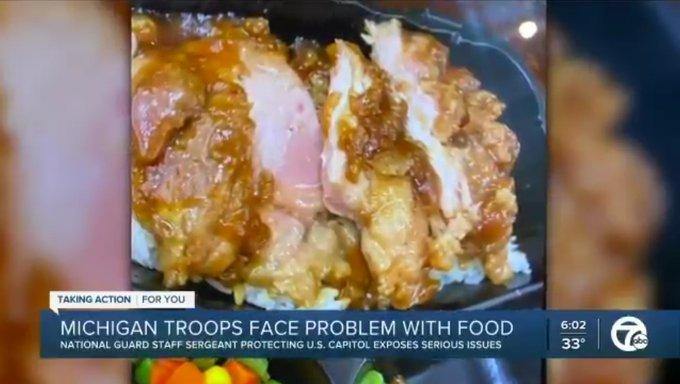 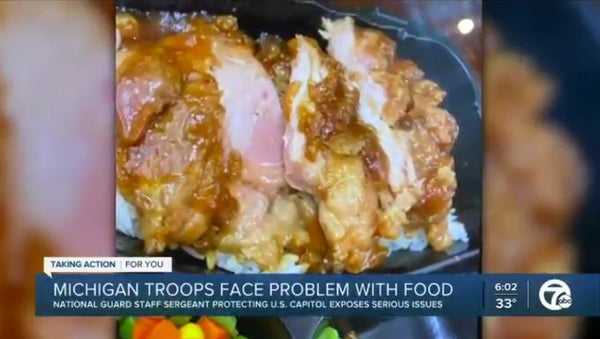 More than a dozen Michigan National Guard troops deployed to Washington, D.C. have been sickened, with some hospitalized, after being served raw, undercooked meat and meals laced with metal shavings according to a report by WXYZ-TV reporter Brian Abel Monday evening. Other meals the troops have received courtesy of a contractor selected by the Democrat run D.C. government are leaving the troops malnourished. The problem with the undercooked food has being going for weeks but apparently yesterday’s meals were so bad they prompted a staff sergeant to contact the Detroit news station.

Guard troops are being kept in D.C. because the Democrats in total control of the federal and local government fear a reprise of the storming of the Capitol that took place January 6. Last week Acting Capitol Police Chief Yogananda Pittman said, “We know that members of the militia groups that were present on January 6 have stated their desires that they want to blow up the Capitol and kill as many members as possible with a direct nexus to the State of the Union, which we know that date has not been identified.”

In his report, Abel played a recording of a whistleblower describing meals: 74 with raw beef in one delivery and lunches served on Sunday with metal shavings. Other meals are described as a dinner roll and Sunny D. Photos sent by the whistleblower were included in the report showing raw, undercooked chicken, metal shavings on rice and a meal pack with snacks suitable for a school field trip–not deployed troops.