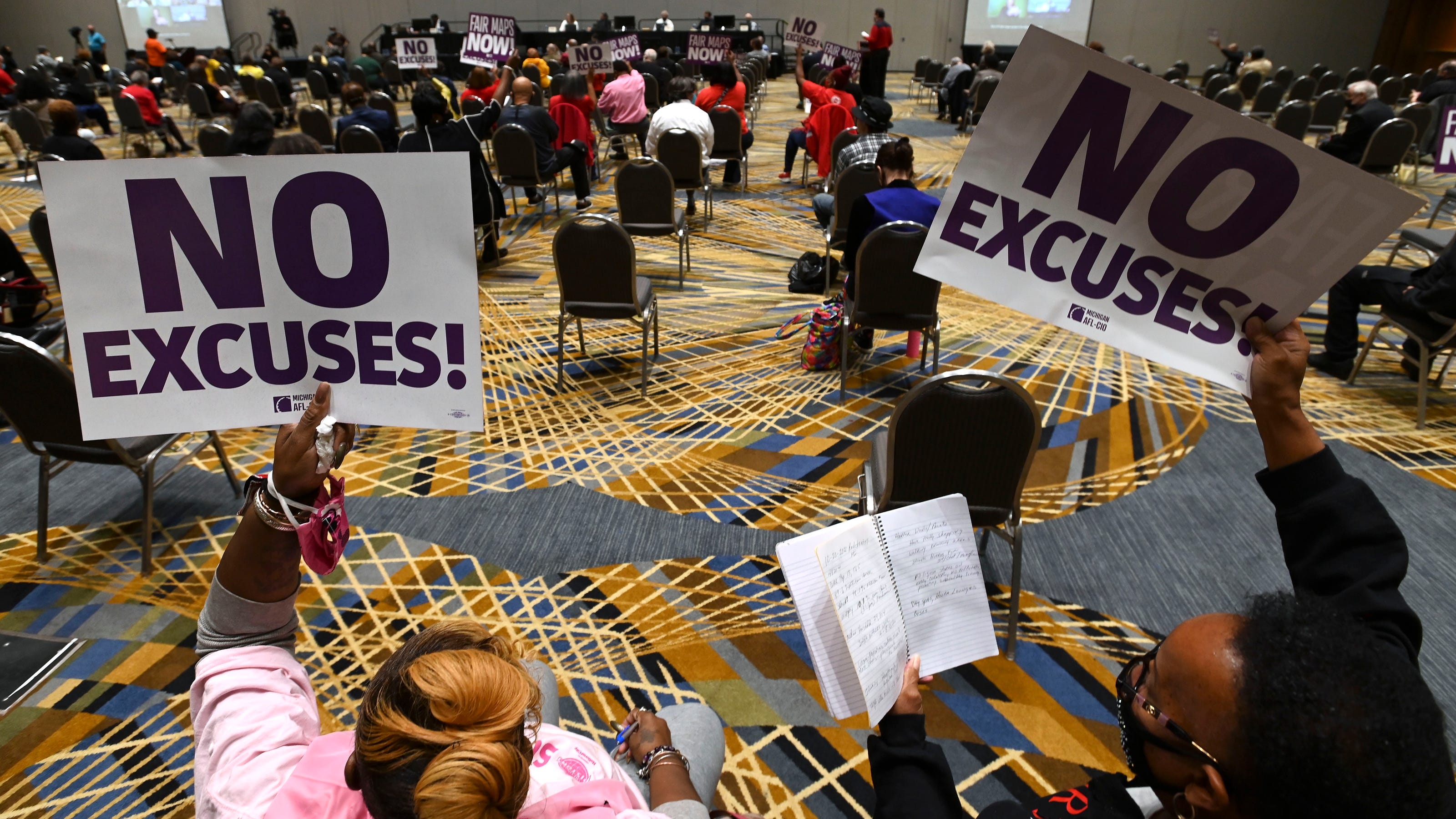 The Left Throws Up The Race Card, Once Again…

Michigan’s redistricting panel chairwoman said Tuesday she hoped the forced release of the commission’s confidential recording will show the group’s efforts to comply with federal voting laws during the political map-drawing process.

Chairwoman Rebecca Szetela’s comments came at the end of a whirlwind 24 hours in which the Michigan Supreme Court ruled the commission was constitutionally required to conduct business in open meetings and ordered the 13-member panel to disclose a recording from an Oct. 27 closed session.

The memos and recording show the commission’s lawyers attempting to mislead the novice mapmakers through a minefield of misinterpretations, such as the Voting Rights Act, what constitutes a political advantage for a political party and how to renumber districts.

“I do think a benefit of these memos being released is the public can see very clearly how hard and how diligently we are working to understand the law and make sure we are complying with it,” Szetela told reporters Tuesday. “…We are making sure we understand the law so that we can draw fair maps in a transparent process.”

The suit forcing the release of the recording was filed by The Detroit News and other media outlets who argued that the commission violated the constitutional mandate that the panel do all of its business in open meetings.

A commission spokesman said Tuesday the group’s legal counsel is still determining what effect the Supreme Court’s ruling would have on future communication and meetings. Monday’s dissent by three justices mused the four-justice majority’s decision cast doubt on whether the panel could meet in closed session ever, even to discuss active litigation.

“Now that we have the ruling, we’ll wait to hear from our legal team how to move forward,” spokesman Edward Woods said.

In the memos released late Monday night, lawyers for Michigan’s redistricting commission repeatedly stressed that it did not have to recreate majority-minority districts in a bid to comply with the Voting Rights Act.

During the Oct. 27 closed session in East Lansing, attorney Bruce Adelson mislead commissioners that the federal judiciary had become more conservative during the past 10 years and was more reluctant to abide by “race-based solutions” or an arbitrary percentage of Black voters in a given district.

Drawing maps with such an arbitrary threshold, Adelson said during the recorded meeting, “is particularly fraught this election cycle.”

In fact, he emphasized in an accompanying memo, the creation of majority-minority districts without appropriate analysis “is illegal” and would constitute a “racial gerrymander.”

“That’s yet another reason that we stick to the data, the analysis, the election results,” Adelson said at the closed session, in determining a minority group’s ability to elect a candidate of choice.

The closed session was held amid growing concern by the commission’s legal team that the requirements of the Voting Rights Act were being misrepresented in outside opinions, including those by the Michigan AFL-CIO and Michigan Civil Rights Commission, Adelson said.

Prior to the meeting, commissioners were repeatedly criticized for not creating enough districts in which racial and ethnic minorities constituted the majority of voters in maps for state House, state Senate and U.S. House. At an Oct. 20 public hearing in Detroit, Michigan Department of Civil Rights Executive Director John Johnson Jr. told the commission that its first set of draft maps violated the Voting Rights Act because they failed to preserve the ability for minority voters to elect candidates of color.

“We both concluded that we really just need to lay this out, make it really clear that these things just aren’t true,” Adelson said.

In the Voting Rights Act memo, Adelson said the federal voting law does not require the creation of majority-minority districts.

“Instead, the Supreme Court states that the VRA only requires that a compact and politically cohesive minority group, for example, Black voters in Detroit, have the opportunity to elect their candidates of choice, NOT that these voters must live in majority Black districts,” Adelson wrote.

The memo was written in mid-October as debate raged in Michigan over a dearth of majority-minority districts in the redistricting commission’s initial plans.

The decreased number is in part due to advice from the commission’s lawyers and efforts to “unpack” districts in Detroit, where predominantly Black voters tend to elect Democratic candidates. The idea is to spread the influence of Democratic-leaning African American voters across more districts that included the suburbs, including areas now drawn to favor Republicans.

But opponents have complained the new formations dilute the Black vote and lessen the chances that African American voters in those districts will be able to get their preferred minority candidate through a primary.

Adelson noted a majority-minority district wasn’t necessary for minority voters to elect a candidate of their choice in compliance with the Voting Rights Act. Instead, he suggested that ability could be assessed and confirmed through an “analysis of election results, voting patterns, and racial (bloc) voting analysis.”

On that note, U.S. Supreme Court has been “crystal clear,” Adelson said.

During the Oct. 27 hearing, Adelson and general counsel Julianne Pastula used Flint as an example of a way the commission could ensure the community remained intact without even explicitly discussing race. They noted Flint residents wanted to elect representatives familiar with the challenges of the city — from the Flint lead-contaminated water crisis to departing auto companies to socioeconomic issues.

That request was more easily accommodated under the law, as well as the commission’s mandate to prioritize communities of common interest, without an overt discussion of race, the lawyers noted. But both considerations at the end of the day would lead to similarly drawn districts that kept Flint intact, they argued.

That is very different then setting an arbitrary percentage for racial makeup in a given district, Pastula said.

Commissioner Cynthia Orton, a Republican commissioner, also noted that many comments were not referencing a Voting Rights Act issue, but a partisan issue.

“They have an agenda, and we need to be able to spot that and weed that out and not fall for that,” said Orton, a southwest Michigan resident.

Adelson agreed and noted the issue wasn’t unique to Michigan and that, around the country, minority voters historically have been densely packed into a few districts “as a result of a working arrangement between the two major political parties.”

He suggested to the commission that they had a chance to change that historical arrangement and open the doors of elected to office to a wider group of candidates.

Commissioner Brittni Kellom, a Detroit Democrat, voiced concern about the advice, noting that it was moving the commission to stick with the maps it had and disregard concerns from the Detroit community.

“The undertone that I know to be true is that in some areas if we don’t change … I think we’re going to miss listening to the citizens in Detroit,” Kellom said. “And that really scares me. I see a bunch of nodding heads. I see us almost taking on the position of what politicians have of: ‘Oh, we did a good job and we’re not going to change it.'”

Adelson’s 30-page memo on “The History of Discrimination in the State of Michigan and Its Influence on Voting” walked commissioners through points of discrimination in Michigan’s history from slaveholders among Detroit’s first families to segregation in Detroit education to the Ku Klux Klan and Black Legion influence in the city.

The memo also covered the 1967 Detroit riot, discrimination in Grand Rapids in the early 20th century, racially restrictive housing covenants in the Ann Arbor suburbs, unlawful foreclosures and redlining in Detroit, and even the Michigan emergency manager law used by state officials to assume control of financially troubled cities — including Flint ahead of the water crisis.

He also cited 2021 VRA violations in Hamtramck, when the city failed to provide Bengali interpreters, voting information or ballots for Bengali residents.

The memo concluded that “minority groups in Michigan face several barriers to voting,” making the state ripe for close scrutiny of its compliance with the Voting Rights Act.