Biden Restarting “Remain in Mexico” Trump Policy. Is it Too Late? 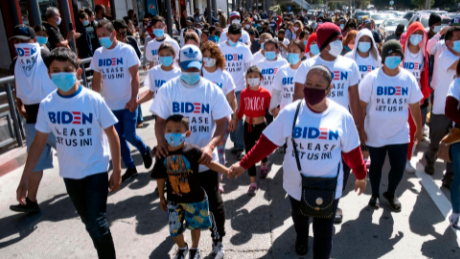 According to Fox News, president Joe Biden will be restarting the Trump-era immigration policy “Remain in Mexico.”

Remain in Mexico (officially Migrant Protection Protocols) is a United States immigration policy implemented in January 2019 under the administration of Donald Trump, affecting immigration across the border with Mexico. Administered by the Department of Homeland Security, it required migrants seeking asylum to remain in Mexico until their US immigration court date. In February 2021, the administration of Joe Biden ended the policy.

On August 14, 2021, a federal judge in Texas ordered a resumption of the policy.[1][2] The Biden administration requested a stay to block the re-enforcement of the policy. That request was denied by both the Fifth Circuit Court of Appeals and on August 24, 2021, the US Supreme Court, as well.[3][4] As result of the Supreme Court ruling, the US government is now required to re-enforce the policy.[5] (Wikipedia)

2021-11-26
Previous Post: McBroom Deserves Honor, According To The Detroit News!
Next Post: University of Michigan Provides Counseling for The “Woke”