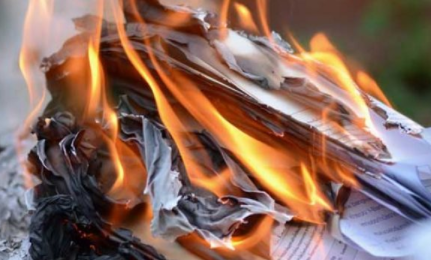 PORT HURON-  A Monday Detroit News report claims that an employee of Gov. Gretchen Whitmer (D) who works for the Michigan Occupational Safety and Health Administration (MIOSHA) admitted to burning public documents in a deposition. MOISHA was attempting to fine the city of Port Huron for violations under some of Whitmer’s COVID-19 mandates, which have now been rendered unconstitutional.

The burned documents were reportedly related to hefty fines and violations that MOISHA attempted to impose on the city. 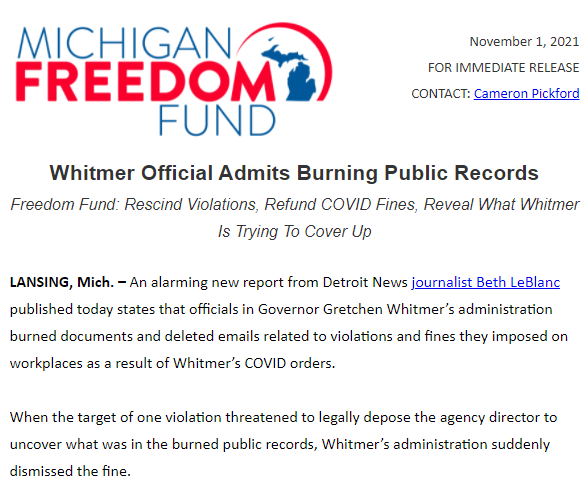 One week after the deposition, MIOSHA suddenly dropped the fines against the city. Now, some are questioning the suspicious timing of the dropped charges.

“Gretchen Whitmer spent months violating her own COVID orders while deploying state officials to target and fine everyday Michiganders doing their best to survive a global pandemic,” said Tori Sachs, executive director of The Michigan Freedom Fund in a Monday press release. “Newly uncovered legal evidence has revealed that Whitmer’s team has been deleting emails and literally burning public records. Whitmer should apologize and immediately rescind and dismiss every one of MIOSHA’s fines and penalties related to her unconstitutional COVID-19 orders.”

Sachs also called for an investigation into the burning of the documents, and noted that Whitmer notoriously campaigned on transparency, which appears to be at odds with this latest development.

Even after the shady timing of the dismissal of the charges, Port Huron says it did nothing wrong.

“The city of Port Huron has maintained it is not guilty of the violations listed in the $6,300 citation issued by the agency in summer 2020,” Detroit News reported. “Even if the city were guilty, officials argued, the citation should be overturned because the Michigan Supreme Court ruled the executive orders on which it was based unconstitutional.”

Whitmer was notoriously heavy-handed with her restrictions during the original outbreak of COVID-19 in 2020, and into 2021.

At one point, she attempted to disallow Michiganders from gathering privately in the homes of friends and family, an order that was deemed unconstitutional.

She faced backlash for her COVID-19 restrictions, and even more backlash when the former Director of Michigan Health and Human Services (HHS) Robert Gordon abruptly resigned earlier this year.

He left his post with a $155,000 severance package paid for by the taxpayer, and a nondisclosure agreement, raising ethical questions.

Eventually, Gordon was compelled to testify after he was subpoenaed by the House Oversight Committee.

He said the nondisclosure was a standard practice that released the state from any potential legal liability, and that he resigned from his post after a disagreement with Whitmer over COVID-19 restrictions.