LANSING- Much speculation has swirled around the recent rise in heating costs for Michigan homes, especially as the weather turns colder. The residents of the Upper Peninsula could see their heating bills almost double in the next couple months. The Detroit News reported that “Michigan uses more propane for home heating than any other state, and this winter, consumers burning it could see a 46% increase in their fuel cost” and that is no laughing matter for the people of Michigan. With costs of everyday products rising significantly and supply chain disruptions impacting most of the country, Americans and Michiganders shouldn’t have to worry about paying two times what they were paying last year to heat their homes.

Even as many Michiganders are worried about the rising costs, Michigan Attorney General Dana Nessel says that it is “moronic” to suggest a link between the rise in energy prices and the proposal to shut down Enbridge’s line 5 pipeline. On Monday she tweeted out to her 107 thousand followers “Gas prices have gone up and down throughout the course of the past 68 years Line 5 has been operating irrespective of the existence of the pipeline. To suggest there is a nexus between the prospect of shutting down Line 5 and the current upward trend in energy prices is moronic.” 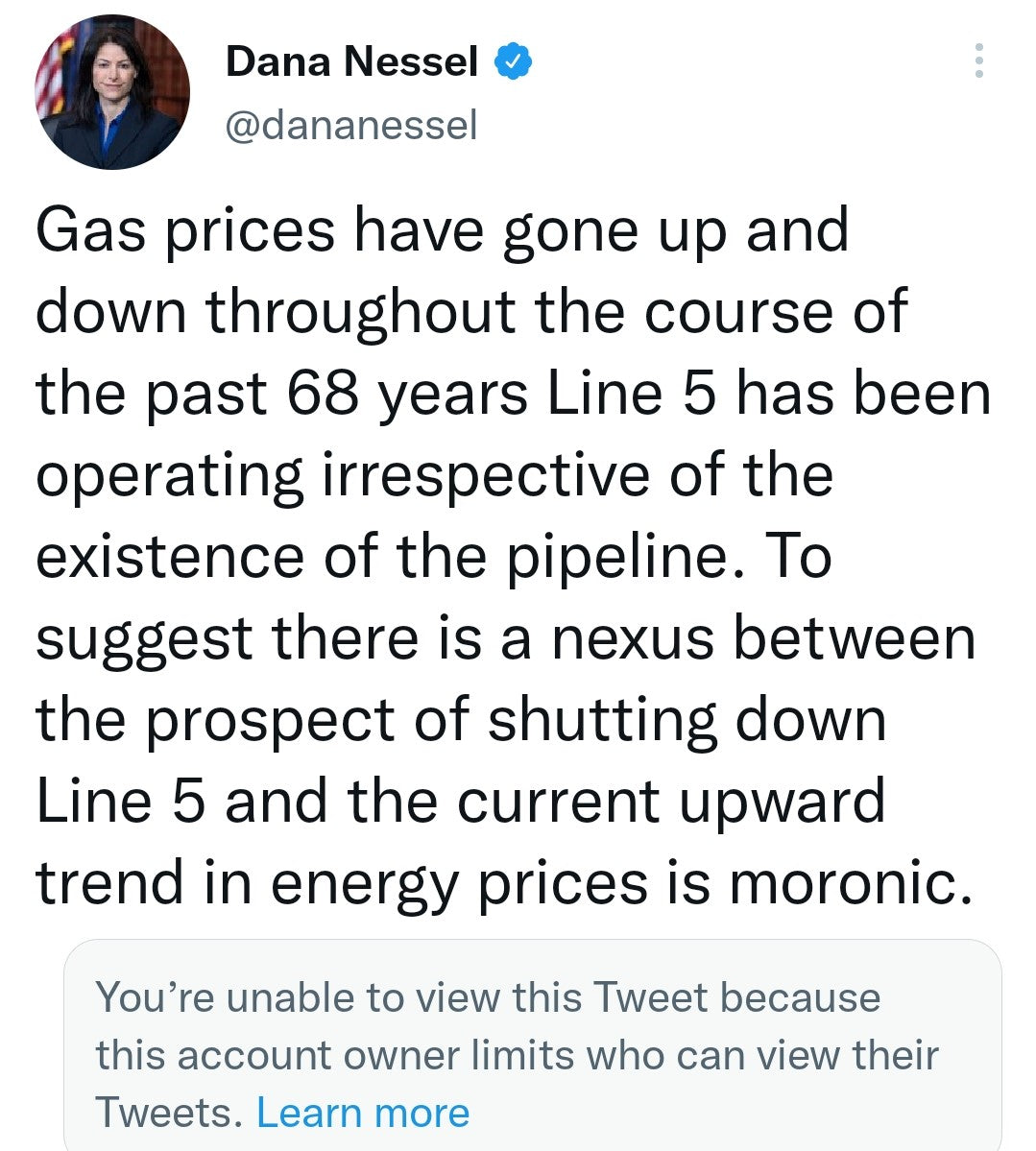 Now the caveat here she tries to slide in is the “current” upward trend. There is a discussion to be had about disruptions in the manufacturing of oil and gas during the pandemic and it is undeniable that the rebound as countries recover from the unprecedented shutdowns are having a big impact on current prices. But there is also a concern for Enbridge which still needs to be making money to supply natural gas and propane. To dismiss the discussion of shutting down one of their main pipelines as having an effect on the current energy price hike seems irresponsible of Michigan’s top lawyer. The discussions may not be strictly raising prices now, but if Governor Whitmer has her way with the pipeline there is no doubt that it would raise the prices of energy.

The Attorney General may laugh off the impact this will have on many working families in Michigan and even those in Canada that depend on the pipeline to provide natural gas and propane. She may deride the concerns from experts that “High natural gas and coal prices are impacting the production of other commodities and pose an upside risk to price forecasts,” as John Baffes, Senior Economist in the World Bank’s Prospects Group says. Regardless of how the Attorney General feels she has touted during the pandemic our reliance on “experts” for their guidance. She seems to be ignoring the experts on this matter and I am curious as to the sudden shift.

I am no energy or global supply chain expert. I do not claim to be able to follow the ever shifting prices of oil and the insane amount of propane needed to heat Michigan homes. I do however hope that I am intelligent enough to see that if a company, like Enbridge, is forced to ship it’s crude oil instead of using a pipeline to get it to the refinery the cost of the final product, the propane used to heat many Michigander’s homes, will go up. Many citizens of Michigan can see that clearly written on the walls. Hopefully our Attorney General can soon see that she is alienating a lot of her own people by deriding their intelligence on this matter.

There is an option for moving line 5 into a tunnel going under the Mackinac Straights that have been scarcely acknowledged by the Whitmer administration if the only concern in shutting down the pipeline is the danger of pollution into the Great Lakes. Many citizens wonder why this has not been pursued as an alternative to shutting down the line completely. We remain waiting to see how this story unfolds and whether Enbridge will continue to sink millions of dollars into legal fees in order to retain the privilege of serving Michigan homes. Some residents wonder why Whitmer seems so set against the company and the residents it serves as well.