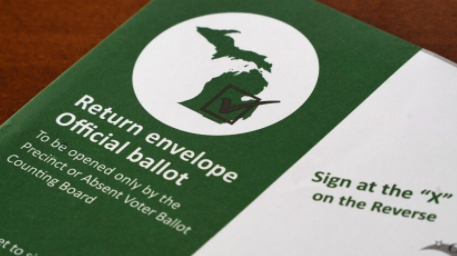 LANSING-  A House Bill supporting election integrity will be voted on this Tuesday in the House Elections and Ethics Committee. Ironically, it will be Election Day.

Adam de Angeli, president of Rescue Michigan, an election integrity group, has been very active in putting an Election Reform Package together. He writes in an email to alert Michiganders:

One of the security failures to get the least amount of attention – but could be among the most important – is the total lack of security features on the ballots themselves.

Absentee ballots have always been the best target for election crimes, because they’re out in the field and can be intercepted.

Last year, the New York Post interviewed a professional election criminal, and he described counterfeit ballots as a central part of his operation:

“The ballot has no specific security features — like a stamp or a watermark — so the insider said he would just make his own ballots.

I just put [the ballot] through the copy machine and it comes out the same way,” the insider said.

But the return envelopes are “more secure than the ballot. You could never recreate the envelope,” he said. So they had to be collected from real voters.

He would have his operatives fan out, going house to house, convincing voters to let them mail completed ballots on their behalf as a public service. The fraudster and his minions would then take the sealed envelopes home and hold them over boiling water.

“You have to steam it to loosen the glue,” said the insider.

He then would remove the real ballot, place the counterfeit ballot inside the signed certificate, and reseal the envelope.

The insider said he took care not to stuff the fake ballots into just a few public mailboxes, but sprinkle them around town. That way he avoided the attention that foiled a sloppy voter-fraud operation in a Paterson, NJ, city council race this year, where 900 ballots were found in just three mailboxes.

“If they had spread them in all different mailboxes, nothing would have happened,” the insider said.

That’s why House Bill 4967 was an important part of the Rescue Michigan Election Reform Package, and it just had a hearing in the House Elections Committee this past Tuesday.

Now it’s time to tell our lawmakers to support HB 4967. Sign our petition right now, at this link!

Similar legislation was signed into law this year in Tennessee – and it passed almost unanimously, with overwhelming bipartisan support: 92-1 in the House and 27-0 in the Senate. Lawmakers received cost estimates of just $105 per election commission to watermark all absentee ballots.

This is an important, common-sense, affordable way to greatly improve the integrity of Michigan elections.

Please call the Chair of the House Elections and Ethics Committee, Rep. Ann Bolin at (517) 373-1784 or email: AnnBollin@house.mi.gov to let her know you support this bill. If you’d like to attend this meeting in person, it will be held at the House Office Building, Room 326 this upcoming Tuesday, November 2nd at noon.