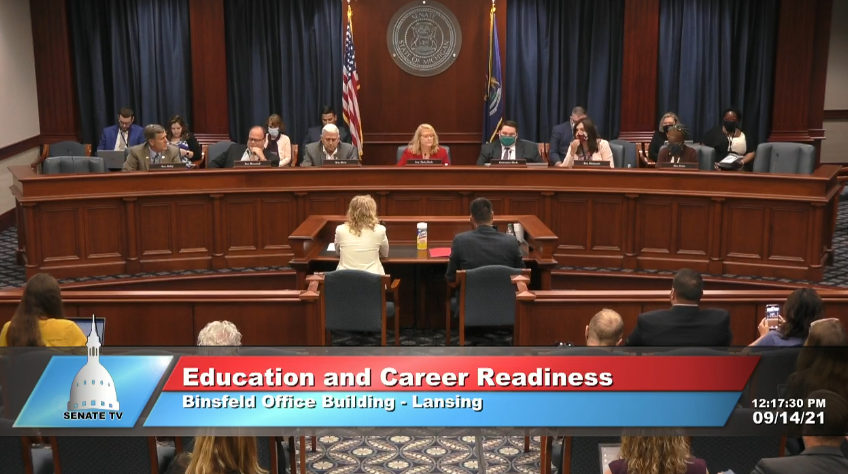 LANSING- Today the Senate Floor passed a package of bills that would give power rightfully back to Michigan parents on masking and vaccine mandates for their school aged children. These bills will proceed to the House of Representatives.

Chair Theis stated parents have the final say over children’s health, and that they are not required to co-parent with the government in order to follow the narrative. That COVID-19 has affected us all, but divided us with mandates masks and vaccines.

Theis stated that these bills do not intend to minimize COVID, that it accounts for .01 deaths in the United States. That truly our biggest problems are the  increases in suicide and depression.

Senate Bill 600 would prevent school districts from requiring vaccines approved under emergency use or FDA-approved COVID-19 vaccines for students to attend school and the public to attend school board meetings.

In Senate Bill 601, it will give parents the ability to go thru a waiver process if they want to opt their children out of having vaccines. “Parents are best people to make these decisions for their children” Chair Theis stated. This bill would help students from getting discriminated against from playing sports and other school events.

Senate Bill 602, introduced by Senator Barrett, and sponsored by Theis, Nesbitt, Runestad, Bumstead, Victory, Bizon Daley, Outman and Vanderwall would prohibit MDHHS from requiring a vaccine authorized under emergency use or an FDA-approved COVID-19 vaccination. This would also prohibit the discrimination against student in public school regardless of vaccination status. “Parents, not the government, have the paramount best interest in their children.” Barrett stated.

Senate Bill 603, introduced by Senator Kim LaTasa, whom is a former teacher and parent, along with sponsors Theis, Barrett, Nesbitt, Runestad, Bumstead, Victory, Bizon, Daley, Outman, Lauwers, and Vanderwall would prevent mandates on schools from wearing face masks and vaccines. 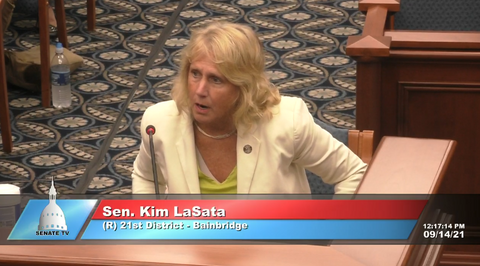 Senator Dana Polehanki questioned LaTasa about increase in school cases in schools and having to constantly shut schools down and constantly having to quarantine students. 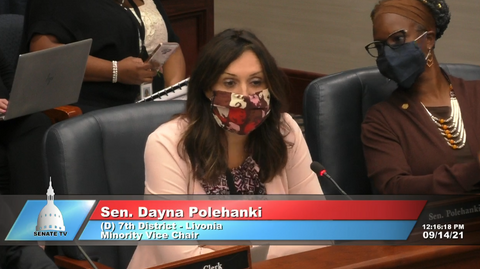 Senator LaTasa states she lives 90 minutes from the Chicago area, and stated more people are dying from gunshots in Chicago. Polehanki persisted stating the MDHHS all recommended universal masking to prevent COVID-19 and the Delta variant.

This sparked a heated discussion between Latasa and Polehanki, which caused Chair Theis to call at ease due to them arguing, to stay on topic as it relates to bills
education and career readiness meeting.

Many constituents testified in support of the bill package.

A local professor spoke in support of the bills. He stated that he’s received hundreds of calls christian student athletes denied ability to participate in their sports.

A local RN testified in hopes decisions will be given to parents. “These lock downs and restrictions have doubled depression in young people.” She mentioned that the recent suicide data is from 2019, and why is that? In prevention, suicide was the biggest focus in her profession in the past year. She got emotional, and stated that her son had attempted suicide as of recent. That this is nonsensical that we have to continue down this path of mandates, as it is literally impossible to have zero cases of any illness. Anywhere. She stated, “This is not democracy, this is tyranny.”

John Clore of Lansing testified on the specific language in the bills about the EAU vaccination, wanting clarification on authorization and emergency authorization on vaccines, specifically the COVID-19 vaccine. That they shouldn’t be mandated even if it’s not EAU vaccination.

Jayme Ansel McElvaney of the Facebook group Let Them Play, gets overwhelmed by emails, calls and messages from parents with children needing help with lawsuits. She told the committee that the “state is losing their mind on your watch.”

They have a 5-year-old that puked in her mask and kept it on due to her anxiety. Another example is a 7-year-old boy got reprimanded for putting his nose below his chin due to his allergies. He was sent to the principal’s office. Kids are being segregated and threatened with suspension.

Let Them Play has raised over 200k for lawsuits, 12 kids have won. They only have 35k left due to the cost of all these lawsuits. And the calls keep coming in.

Tracy Nokovich Barker, of Our Children Our Choice, testified on how mandates  would not allow her kids to be able to participate in their sports. Her family sacrifices and she stays home to educate her children. She would rather make sacrifices in her own life than have a school entity telling her what to do with her kids.

Barker reminded the committee that they work for us and doesn’t need their permission. “My children will not be quarantined, especially when they are healthy.
I will always fight for freedom of choice. We have the power to say no. I’m telling you that’s our choice and we’re taking it.”

A concerned citizen of Alma mentioned he’s attended school board meetings, and spoken to school board presidents and board members. And he said that it comes down to one thing. That this has nothing to do with their (kids) health. It comes back to the same thing: receiving money from the CARES act, along with other federal funding. They must respond to conditions. The state board of education will get the money if they behave and comply. He also mentioned the FDA has not officially approved COVID-19 vaccine, its still for emergency use. That school enrollment is down, and that takes money away from schools.

An Oxford mother of three testified, stating her kindergarten-aged daughter is speech delayed. Her daughter is required to wear a mask, but can’t atriculate words if both her and her speech therapist are wearing masks. Her son also has learning and social disabilities,that he needs to see faces for social cues. Masks are hindering her children. Masking needs to be left up to the parents and she support the bills.

Jon Rocha, running for Congress in the 6th District mentioned that these bills talk about choice, we’re not mandating wearing or not wearing masks nor mandates. Rocha mentioned the 14th amendment shall not give the government the authority. “We’re not demanding people taking the mask off, or not get vaccinated. It’s freedom of choice.”

Representing her sons, Angela Rigas who is a candidate running for House Representative in the 86th District spoke out about her of her 5-year-old son, who was in a speech supportive preschool. When the school had a beekeeper visit his school for a presentation, she noticed a photo of her son with a mask on. She immediately pulled him from the school.

Rigas’ 6th grader wasn’t in school all year. He suffers from depression and anxiety, and also has a slight case of anemia. He got white splotches on his face from wearing a mask with her to the store. Because of his mask exemption, he was given grief at school for not wearing a mask. “This just isn’t fair. Us parents will continue to hold the line for these children.”

The committee reported favorably without amendment, and the committee recommended immediate effect. We will keep you posted on the progress of this bill package.