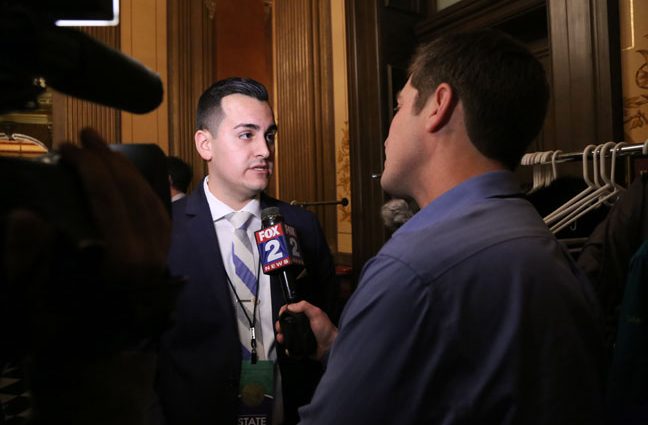 MICHIGAN- Democrat State Representative Darrin Camilleri of Downriver (District 23) has collaborated with local mainstream media in publicly demanding a local conservative organization, the Michigan Leadership Group cancel their AR-15 giveaway for their upcoming candidate meet and greet event on June 5th in wake of the school shooting in Uvalde, Texas.

The State Rep is obviously politicizing this and trying to gain notoriety as Camilleri is termed out and running for a higher seat within the 4th district of the Michigan senate. Camilleri also supports House Resolution 306, introduced last week, which urges the United States Congress to fund scientific research on gun violence and its effects on public health, and to require the Surgeon General of the United States to issue annual reports to the public on the current state of gun violence in the country.

As the Detroit News writes, “The drawing for the gun, advertised as a Radical Firearms AR-15 valued at $684.95, is open to anyone legally eligible to purchase and own a gun under Michigan law.”

They further go on quoting Camilleri, “It’s quite frankly disgusting” and “They should apologize to the victims in Texas, they should apologize to the families here in Michigan who are so offended by their actions, and they should really think about canceling the event altogether and helping our community move forward.” Camilleri feels the event “promotes a culture of violence I don’t think is appropriate.”

The one thing both sides of the aisle can unilaterally agree upon is the fact the school resource officer and law enforcement acted inappropriately and negligent which caused many more casualties in Uvalde. According to Texas Governor Abbott, he was livid in a press release in finding out after the shooting, a back door to the school was not only unsecured, but was propped open by a teacher just before 11:30am. Responsibility and accountability are lacking twofold.

Keep in mind the Michigan Leadership Group started organizing this event back in April, weeks prior to the tragic events in Texas. The meet and greet was originally scheduled to be held at Top Gun shooting range in Taylor, however the venue reached out a little over a week ago after realizing they were double booked. This forced the group to have their event at the Michigan Leadership Group.

Leadership of the group are planning to move forward with the event and will be holding a prayer vigil for the victims of Uvalde. They have decided the winner of the giveaway, instead of receiving the AR-15 firearm will be given a gift card in the amount of $687. The firearm will not be on the premises.

Ronald Matte, President of the Michigan Leadership Group replied to the Detroit News by giving this statement, in which was combed through by the author. This is Matte’s statement in full:

“My wife and I lost our 24 year old daughter in a terrible fatal motorcycle accident in Romulus last year on June 24th. We could hardly breathe for months and our family, friends, and members of the community were there to hold us up and help us function when we couldn’t. Even now as I’m writing it seems as if it was just yesterday.”

Matte goes on to say, “Living this grief we still cannot fathom the heartache and sorrow that the victims and their families, fellow students, school administrators, and the Uvalde, Texas community at large are enduring right now in the wake of losing so many innocent children by the actions of a mentally ill person.  We will continue to keep them in our prayers, and are planning to hold a prayer vigil in addition to the community event we’ve planned.”

“It’s unfortunate that Rep. Camilleri would use this time as an opportunity to grandstand and cause division instead of working to unite the community. We need politicians on both sides of the aisle to come together and help find a solution to both the mental health crisis in America, and securing the lives and safety of our school-aged children. Although a successful politician, he (Camilleri) is  failed community leader.”

What are your thoughts? Should the group move forward with the event, and did they make the right decision in choosing a gift card in the amount of the firearm?