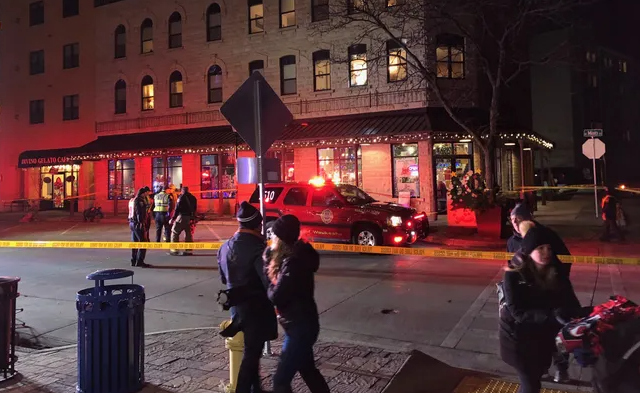 WISCONSIN- The community in Waukesha, Wisconsin are in shock after a car plowed through a family-friendly Christmas Parade tonight, injuring up to 20 people with some fatalities.

As reported by the Milwaukee Journal Sentinel:

WAUKESHA – A treasured rite of the holiday season turned into a scene of bloody, deadly mayhem late Sunday afternoon as a vehicle plowed into the Waukesha Christmas Parade, killing some and leaving more than 20 people injured, authorities said.

There were some fatalities but a figure was not released as authorities sought to notify families.

Eleven adults and 12 children were ferried to local hospitals. Others were taken by friends and family. Children’s Wisconsin Hospital said they had 15 patients and no fatalities.

“The vehicle struck more than 20 individuals. Some of the individuals were children and there were some fatalities as a result of this incident,” he said.

A suspect vehicle was recovered and a “person of interest” was in custody, the police chief said. People were transported to hospitals via ambulances and police vehicles, he added.

Thompson said during the incident “an officer discharged his weapon at the suspect vehicle to try to stop the vehicle. No bystanders were injured as a result of the weapon discharge.”

He added, “It is unknown at this time whether it incident has any nexus to terrorism.”

The incident occurred during one of the city’s biggest and most cherished annual events. A joyous crowd lined both sides of the road, people bundled against the cold.

One video showed the red SUV on the parade route, veering down the street and pulling left behind the Waukesha South High School Black Shirt Band.

Corey Montiho, School District of Waukesha board member, was by Mainstream Bar & Grill when he heard that his daughter’s youth dance team was hit.

“There were pom-poms and shoes and spilled hot chocolate everywhere,” he said. “I had to go from one crumpled body to the other to find my daughter. My wife and two daughters were almost hit. Please pray for everybody. Please pray. My family is safe but many are not. I held one little girl’s head in my hand, she was seizing and she was bleeding out of her ears. I held her mother as she collapsed. Please pray.”

In a Facebook post, the Waukesha Xtreme Dance team thanked those who checked on the safety of team members and their families.

“Please keep them in your thoughts and prayers,” the group said, adding it would provide “an update when we know more.”

Videos and eyewitnesses on social media appear to show the “Milwaukee Dancing Grannies” being struck by the vehicle. Members range in age from their early 50’s to mid-70’s. The only requirement is that members must be grandmothers themselves, the website said.

“Members of the group and volunteers were impacted and we are waiting for word on their conditions,” said a Facebook post from the Milwaukee Dancing Grannies. “Please keep the Grannies,  all those injured, and all those who witnessed this horrible event in your thoughts and prayers.”

Angelito Tenorio, a West Allis alderman who is running for Wisconsin state treasurer, said he had just finished marching in the parade with his family and friends and was walking back toward Main Street.

“As we were walking back in between the buildings we saw an SUV crossover, just put the pedal to the metal and just zooming full speed along the parade route. And then we heard a loud bang, and just deafening cries and screams from people who are struck by the vehicle,” Tenorio said. “And then, and then we saw people running away or stopping crying, and there, there are people on the ground who looked like they’d been hit by the vehicle.”

He added, “It just all happened so fast.”

Videos posted to social media, including a live feed of the parade operated by the City of Waukesha, show a red SUV breaking through barriers and speeding into the roadway where the parade was taking place.

In the city’s footage, taken from a distance, the SUV speeds into the parade just behind a school marching band.

Photo and video courtesy of the Milwaukee Journal Sentinel

2021-11-22
Previous Post: Benton Harbor Mayor Mentions “My Good Friend Fred Upton” in Regard to Water Crisis
Next Post: And Yet, Another Michigan Gubernatorial Candidate Emerges…