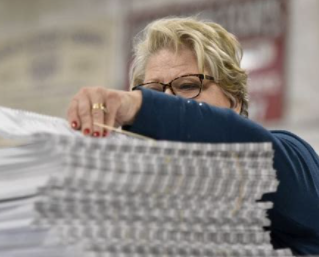 HILLSDALE- The Hillsdale county chief deputy clerk, Abe Dane has seized all the  remaining election materials from the Adams Township Hall, including archived ballots from previous elections in the ongoing saga between the Adams Township officials and the Secretary of State.

Hillsdale County was given power by the state to conduct this past week’s election since the removal of the Adams County clerk, Stephanie Scott. Scott  was released of her duties from elections at the end of October for questioning the authenticity of the tabulators and integrity of their county’s voting machines.

On Election Day, the Adams Township Treasurer, Patricia Williams unlocked the basement door for Dane early in the day for him to gain access to election materials in order to conduct the election.

With hundreds of people coming and going throughout the day, poll watchers were questioning the chain of custody of election materials and Danes use of the hall’s basement, which was unsecured the entire day. They notified township officials of this by email the following day.

“Due to the controversial atmosphere created by many false statements, and misinformation regarding election security and procedures in Adams Township, as a designated Adams Township elections administrator, I took possession of all November 3rd, 2020 election ballots, AV envelopes, and ballot applications, as I have never possessed a key to any area of the Adams Township hall the door to the basement storage area was left unlocked, but closed for my convenience and access through the day.”

Dane also stated that he was on the premises the entire day from 5:45am until it was locked by the Township Treasurer at 10pm.

The township supervisor, Mark Nichols stated, “I think our county clerk is acting in good faith at the request/command of the secretary of state, but we don’t know it that’s legal.”

Please follow her so she she can go live in the future!