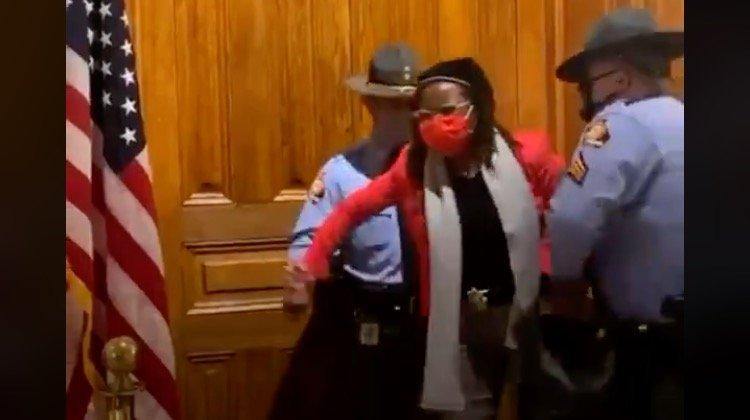 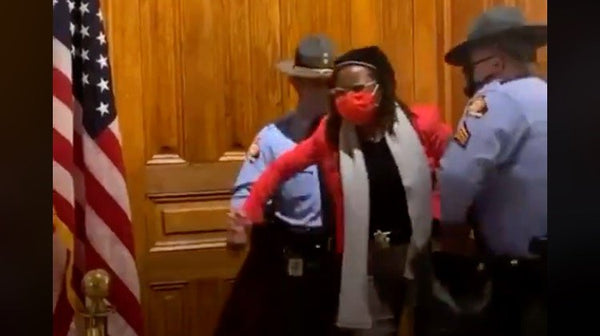 The legislation was pushed through Georgia’s House and Senate after Kemp and the crooked Secretary of State handed Georgia over to the Democrats in TWO separate elections.

Because of mail-in ballots, ballot drop boxes, no signature checks and ballot harvesting, the Democrats took control of the White House and flipped the Senate blue.

Kemp finally signed new election laws that would require a photo ID in order to vote by absentee ballot and it would limit the number of drop boxes (they should be eliminated completely).

One Georgia state lawmaker became furious with Governor Kemp for signing new election laws that she began knocking on Kemp’s door where he was live-streaming his announcement.

Cannon was charged with obstruction of law enforcement and disrupting General Assembly sessions, according to the Georgia State Patrol.

Georgia state troopers arrested state Rep. Park Cannon on Thursday as she knocked on Gov. Brian Kemp’s door, interrupting his livestreamed announcement that he had signed an elections bill into law.

The officers forcibly removed Cannon, a Democrat from Atlanta, dragging her through the Capitol and pushing her into a police car.

Cannon was with several other protesters when she knocked on Kemp’s office door, saying the public should be allowed to witness the announcement of the bill signing. The sweeping legislation requires ID for absentee ballots, limits drop boxes and changes early voting hours.

“Why are you arresting her?” This Facebook Live video from @TWareStevens shows the moment authorities detained state Rep. Park Cannon as @GovKemp was behind those doors signing elections restrictions into law. #gapol pic.twitter.com/U1xMJ6tZrY

Additional footage of the arrest:

Why are the State Patrol arresting a State Representative during session? #gapol pic.twitter.com/lzs5EW78t7