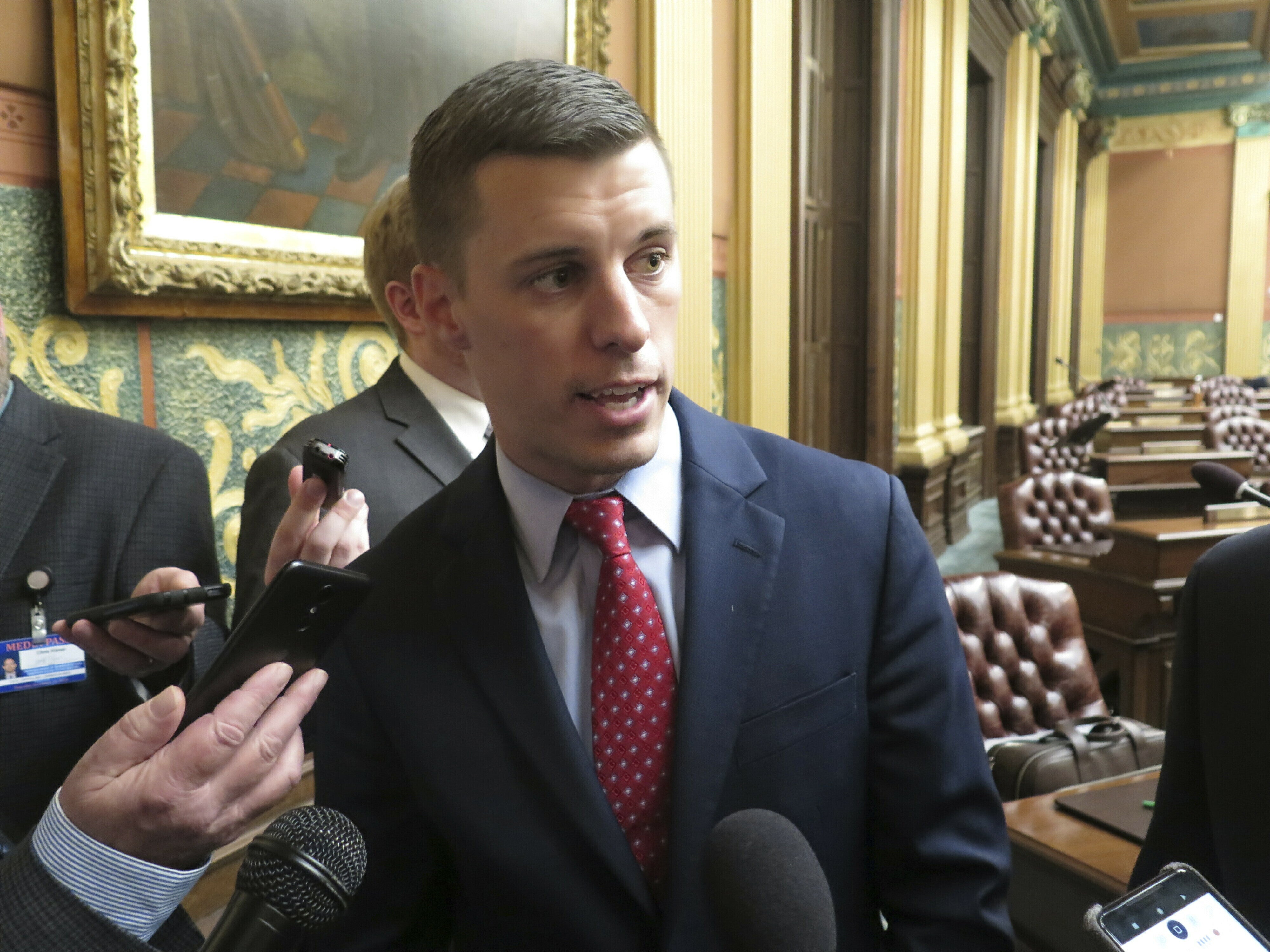 The woman who accused former Michigan House Speaker Lee Chatfield of multiple sexual assaults since she was a teenager was revealed to be his own sister-in-law.

Rebekah Chatfield, who is married to the politician’s younger brother, claims the former speaker assaulted her “more times than I can count” beginning when she was 15 years old more than a decade ago.

Rebekah, now 26, filed the criminal complaint with the Lansing Police Department against Lee, 33, she said in several interviews with Bridge Michigan.

The assaults allegedly began when she dated the politician’s younger brother and continued until 2021, she told the outlet.

“He destroyed me, and has controlled my life since I was 15-16, the past 10-11 years,” she said. “And I know the only way to get justice for this is to come forward and to file a criminal (complaint) against him.”

Lee, a Republican, was the youngest person to serve as Speaker of the House in Michigan in over 100 years. He left office in 2020 due to term limits.

Rebekah claimed the assaults began when she was 15 or 16 years old at Northern Michigan Christian Academy, a private school in Burt Lake where Lee taught and coached soccer before he launched his political career. His father is pastor of the church, the school superintendent and a teacher.

She had reportedly been dating Lee’s younger brother, Aaron Chatfield. Rebekah and Aaron were pushed to marry when at 19, after their families discovered they were having sex, according to the report.

Rebekah claimed she kept the incidents secret from her family and husband because she was ashamed and afraid to tell them. Her mental health reached a breaking point in December, when she finally shared her trauma with them and subsequently filed the police report, according to Bridge.

Rebekah would allegedly stay at Lee’s home often, and she said the touching began as unwanted gropes in the basement stairwell, eventually progressing to sexual intercourse, she told Bridge. She claimed the assaults continued “more times than I can count.

“I had a lot of family stuff going on in my life,” she told Bridge. “My dad was a recovering alcoholic, and so I believe that Lee used those (circumstances) against me and helped take advantage of me. So he would manipulate me, he would mess with my emotions.”

With trouble at home, she became more dependent on the Chatfield family, who “ran that whole church and school” that had become essential to her social life, she said.

Aaron claimed to remember his older brother being handsy with his then-girlfriend when they were younger.

“I always had questions,” he told Bridge. “I don’t remember how I asked, I just remember saying, ‘Is something going on between you and Lee?’

“I just saw the way he looked at her.”

Rebekah said Lee would find reasons to text her late at night, and enter the guest room and grope her. She said the sexual assaults when she stayed at Lee’s home became more frequent, eventually culminating in sex. Each time she would break up with Aaron, she said Lee would coax them back together.

The psychological abuse wore her down, she said, and she stopped resisting.

“When I was in my darkest place, I didn’t know what else to do, and he continued to remind me that I didn’t have, really, anyone else but him,” she said.

Rebekah’s mother, Debbie Newberry, claimed to have seen a change in her daughter’s behavior in her later teenage years as Lee allegedly began to groom her daughter.

Rebekah and Aaron were engaged in June 2014 and married two months later, according to Bridge. Neither of the 19-year olds were prepared for marriage, and had second thoughts, the report said.

The night before the wedding, while Rebekah was crying inside of the Chatfield’s home, she alleged Lee offered to comfort her, before forcing her into a closet for a sex act.

“After he finished he said, ‘Don’t worry. I’ll talk to Aaron, you guys are getting married.’” Rebekah Chatfield told Bridge. “And he walked out.”

After Rebekah and Aaron were married, the affair allegedly continued while the two went off to separate colleges. She recalled one time where Lee allegedly visited with his wife and two children, “And during my husband’s soccer game,” she said, “he took me back to my house and assaulted me.”

Aaron quit school earlier to support his brother’s political career. He claimed to Bridge that he’d worked in Lansing as Lee’s driver and would take the rising politician to strip clubs and to meet with various women, including a former staffer.

“Lee portrays himself as a family tradition, conservative guy who believes in the Bible and the Bible is so important,” said Aaron, 26. “No, it couldn’t be further from who my man was as a person.”

On one occasion two years ago, Rebekah said she and Aaron were visiting Lee’s office when he asked Aaron to go pick up a pizza. Lee pressured her into unwanted sex in a separate room before his brother returned, she alleged.

Since Aaron learned about his brother’s years of assault on his wife in December, he has been supportive of his wife and is confident she is telling the truth, he alleged.

“I’m rethinking every conversation I ever had with Lee,” Aaron reportedly said.

The pain, he said,  “goes very deep,” calling his older brother “the person I looked up to most in the world.”

Lee’s father, Rusy Chatfield, who founded the church and school where his son taught told Bridge “the allegations are false.”

Paul Chatfield, another younger brother who also worked with Lee in politics, said he believes Lee engaged in “inappropriate behavior” with Rebekah but questions her timeline.

“What she is saying, I don’t believe,” Paul Chatfield said, adding that “the best-case scenario is, I’m disappointed” in his brother.

Rebekah acknowledged to the Bridge that at times it was she who initiated contact with Lee, but denied that it was consensual.

“…it was never consensual, because it started when I was a minor — the brainwashing, the mentality, the manipulation, the psychological, the emotional — he groomed me into being who he wanted me to be.”

Lee has not commented on the accusations, but his attorney Mary Chartier told The Bridge in a statement that both were “consenting adults” in the relationship.

“Their affair lasted for years, but they were both consenting adults,” she said. “Mr. Chatfield deeply regrets the decisions he has made. It has caused great pain to his wife and family, and they are working through this together. But he did not assault this woman in any manner during their years-long adult relationship. He intends to vigorously fight these false claims.”

Under Michigan law, the age of consent in 16, however it is illegal for teachers to have any type of penetrative sex with a student under the age of 18.