VIDEO: How to Restore our Republic and Form an Assembly

ALMA- The group Citizen’s Against was kind enough to invite us to a meeting with Dave Roberts on how to start an assembly.

Roberts is with the Ohio State Jural Assembly, which was formed in March of 2020. Currently they have 66 county assemblies in Ohio.

Roberts brought up a point that through the last several years, we as the people have given the government PERMISSION to take control over our rights since birth. We give them permission by our birth certificate, getting a social security number, driver’s license, and much more.

We also learned that DC is not a state. It’s a corporation. DC is a private nation owned by the Vatican. And that anything coming out of it is null and void on its face.

Washington is a corporation called the United States. Their laws and rules can only go so far. They cannot leave their corporate charter. The people give them permission, and that’s why our civil rights are being stripped away. See below, courtesy of the Ohio Jural Assembly: 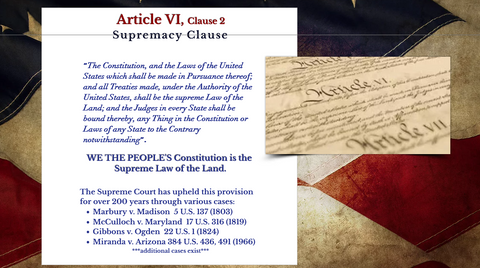 When you claim yourself as a U.S. Citizen, you allow this.

Most people know of the 3 branches of government, but there’s actually five. In addition to Legislative, Judicial, and Executive, there’s:

They are in our Bill of Rights. Most people think of the first amendment when it comes to peaceful assembly, but an assembly is so much more than that. An assembly can provide and decide who takes over school board members, etc.

Common law grand jury is a jury of the people, requiring a minimum of 25 people. And they can bring indictment in overthrowing any leader. There are no rules defining a procedure for how they are elected. The people, without the influence of government, decide for themselves how the grand jury members are elected.

Any contract the government has us bound to, are made up of codes and laws that violate the constitution, therefore, it has no standing. All rights are inherit in the people. govt has no rights, but the people hold the power.

In order to do this, an assembly uses an Affidavit process. Affidavits are binding documents in any court in America and are used all the time in our society. Affidavits are being used to make notice to our public servants who are violating any of our God-given rights.

You can find out more and download affidavit forms by going to the Ohio State Jury Assembly website. They have affidavits for school boards, healthcare workers and more:

2021-09-29
Previous Post: VIDEO: Lt. Governor Gilchrist’s Driver Gets Pushy!
Next Post: Rescue Michigan Delivering over 4000 Comments to SOS at 9am!