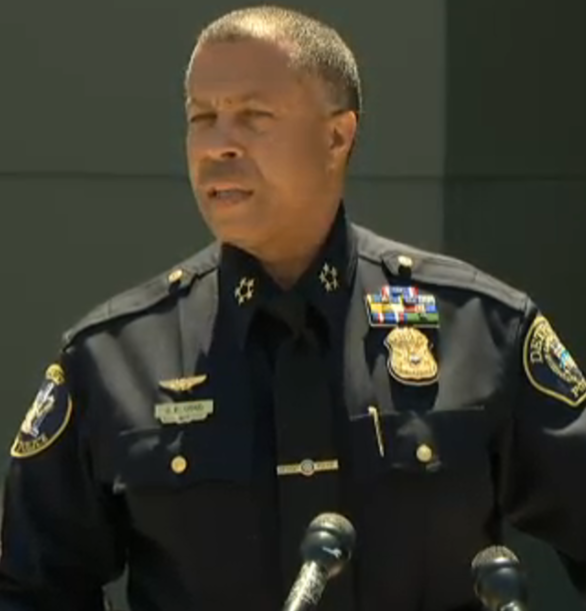 DETROIT- James Craig, Gubernatorial candidate for Michigan was NOT a licensed police officer in the State of Michigan, nor the State of Ohio when he was police chief for the Cincinnati Police Department in 2011. Michigan Radio reports his license is “lapsed,” according to public records.

It makes me wonder. When was the last time he was licensed? Taken a physical fitness test? Been to the firing range? Taken an assessment test? If his license was “lapsed” back in 2011, then how long has it been expired?

When Craig returned to Detroit as police chief in 2013, he indicated through a spokesperson that he planned to complete the certification process through MCOLES.

“Chief James Craig is a veteran police officer with over 36 years of experience,” Kelly Miner, a spokesperson for DPD said in a statement to The Detroit Free Press at the time. “MCOLES certification is not required to serve as a police chief, yet Chief Craig voluntarily intends on completing the process to become a fully MCOLES certified law enforcement officer.”

Craig got licensed as a certified officer in Michigan in 1977, when he first joined the Detroit Police Department. For those who are in “good standing” as licensed officers in another state, obtaining MCOLES certification requires passing a written test, firearms test, physical and psychological test, as well as filing documentation.

Craig faced similar controversy over state certification when he served as police chief of the Cincinnati Police Department starting in 2011.

Although Craig signed a form that read “I must pass OPOTC state certification examination,” in his first month on the job, he later filed for a waiver for an exemption, which the Ohio Peace Officer Training Commission denied him in 2012.

In an eight-page decision, the Commission said it did not have the authority to grant the waiver, adding that Ohio law requires all officers to take a 200-question test and undergo more than 500 hours of training. Craig fought the decision in court, claiming that the test was overly time-consuming and presented unnecessary obstacles for candidates from out of state to fill leadership positions.

“Some people have asked, ‘What type of leadership example are you setting?’” Craig said at the time. “I’m setting a good one, because I believe in principle, and when wronged, you should fight.”

His appeal in the case was dismissed by an Ohio county court in May 2013. Craig assumed command of the Detroit Police Department about a month later.

Setting a good example? REALLY?!? Dodging state certification examinations? Waivers? Is this who we want as governor of Michigan? Especially when he’s the establishment pick?

Watch as Mellissa Carone calls out James Craig for facilitating the fraud at the TCF center!

Mellissa Carone who is running for Michigan State Representative  made a great observation about the TCF center, and who was ordering the Detroit Police Department, to restrict poll watchers and challengers from entering the TCF center during the 2020 presidential election ballot count, in which James Craig was Chief of the Detroit police department.

Mellissa Carone who was a key witness for Rudy Giuliani about the Dominion voting machines, was also endorsed by Rudy Giuliani, Mike Lindell, Roger Stone and Jovan Pulitzer, and has a strong campaign to take her district!