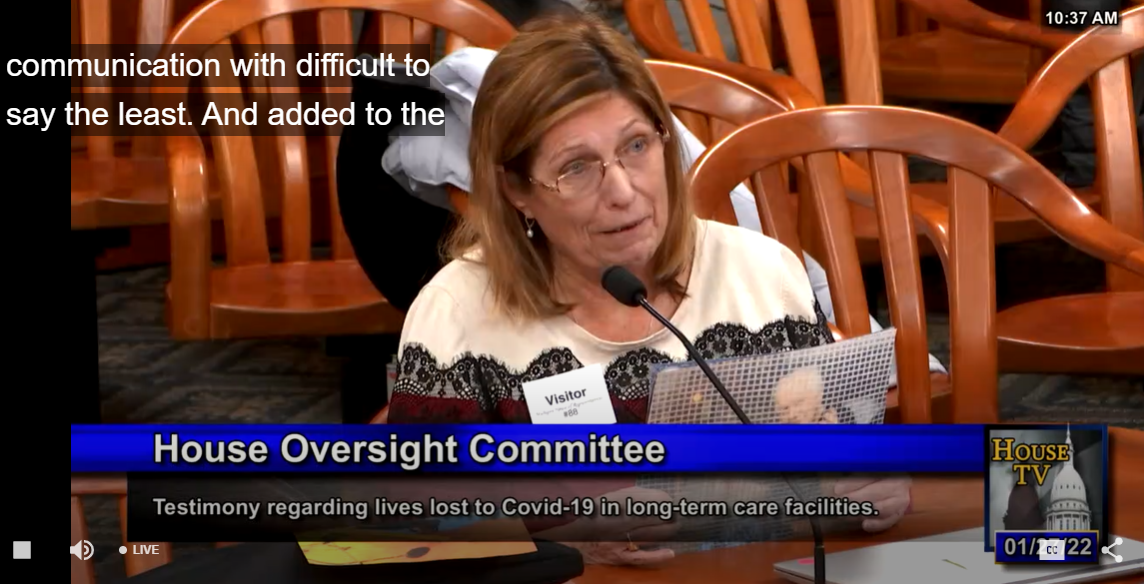 LANSING- The Michigan House Oversight Committee hears testimony of family members that have lost loved ones in nursing homes during the COVID-19 pandemic.

“You’ll never be able to quantify what has happened here.” Chair Steve Johnson replied after hearing testimony speaking of their loved ones lost to neglect, isolation, and getting ill from COVID-19 patients that were placed into these homes after being taken out of hospitals.

“We were taught to listen to and respect authority.” family members stated when listening to doctors and nurses. A family’s mother, whom was in a long-term care facility. She was a government employee that had great health insurance. However, the facility wasn’t giving her her water pill because they were “too expensive” and was going into renal failure, on top of having a weeping wound in her leg. This was during 2019.

At the beginning of the pandemic, the daughters walked in and attempted to take their mom out of the home and wouldn’t allow it. From there her health started to deteriorate, and according to their mother (who was still cognizant) their doors were shut, and they could hear shuffling of beds in the hallways. They would take away the mother’s cell phone, limiting communication as they would talk on a daily basis.

One day the daughters spoke to the family’s nurse, and said her vitals were fine, until somehow to get a call 20 minutes later that she had a fever with low oxygen. From there she was taken to the hospital, put on a ventilator, and sadly passed away. The mother’s address was registered at a family member’s home, in which they feel she was not counted in the death toll of COVID-19 deaths in LTC facilities.

“It’s hard sitting there waiting for that phone call.” said during testimony of a loved one they were not able to go see and be with them to hold their hand. They died alone.

Rep. Yaroch presented two bills that would help with transparency and competency in the reporting requirements in nursing facilities.

House Bills 5659 in which LARA would be given reporting requirements related to certain nursing home facilities.

2022-01-27
Previous Post: SPECIAL GUEST ARTICLE: The Fraud Called COVID Pneumonia
Next Post: City of Port Huron to Testify on The Burning of Documents by MIOSHA