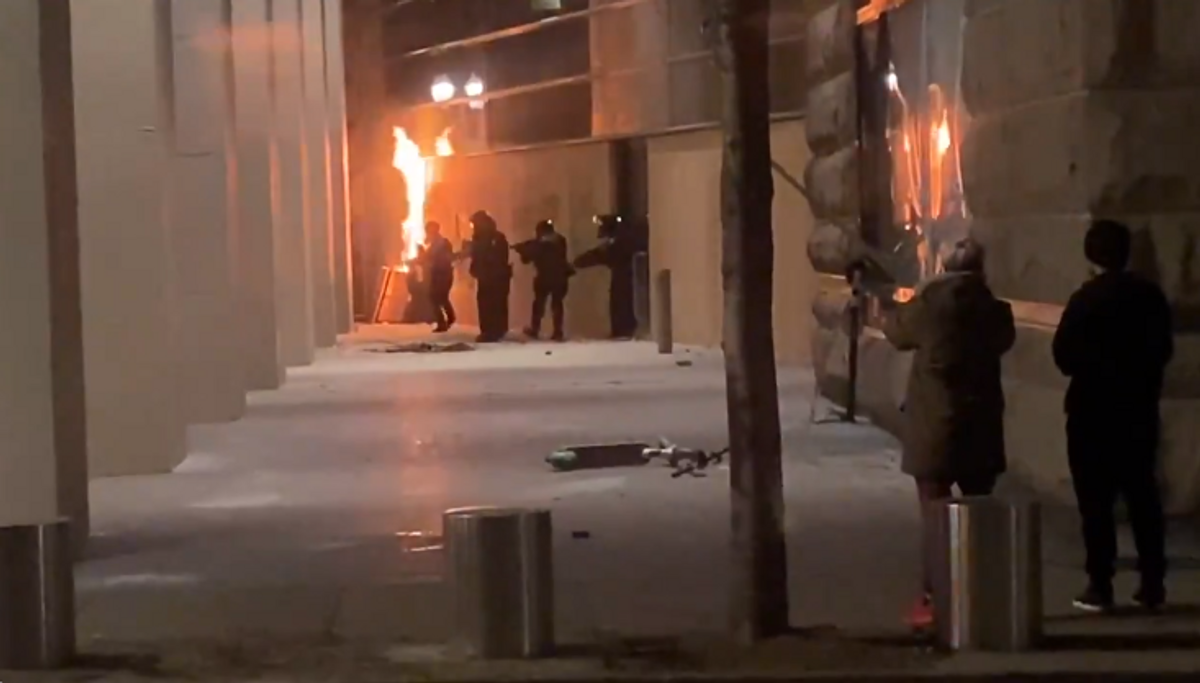 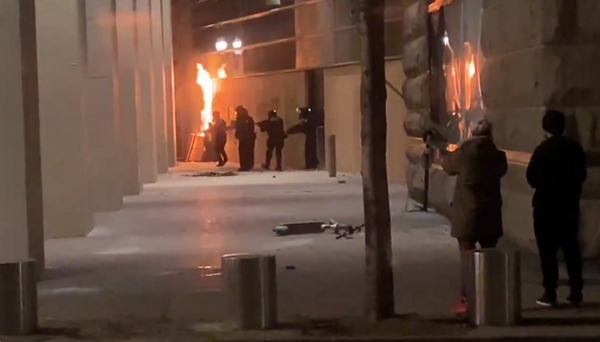 Portland Police are bracing for a ‘No Borders’ protest

Violence erupted in Portland on Thursday night as rioters targeted the Mark O. Hatfield U.S. Courthouse. Federal officers were dispatched to quell the unrest that included fires and windows smashed.

There had been regular protests and riots in downtown Portland since the May 25 death of George Floyd in Minneapolis. Despite frequent and reoccurring unrest in the area of the federal courthouse, the protective fence surrounding the federal courthouse was taken down Thursday for the first time since last summer, KGW reported.

Black-clad protesters swarmed the Oregon courthouse Thursday night. A group of around 50 gathered at the federal courthouse building, according to KOIN reporter Jennifer Dowling. Fires were set near the courthouse, and rioters ripped down plywood in order to break the windows on the federal building. One rioter used a scooter to smash a  window.


It appears as if some people have broken in the glass on the front doors of the federal courthouse building after ripping down the plywood & setting it on fire. #koin6news #pdx #Oregon #Portland #pnw pic.twitter.com/2RfgoPmNlm

Someone in the group set fire to the plywood on the building at the entrance to the courthouse. Federal officers are responding with crowd control munitions. #koin6news #pdx #pnw #Oregon #Portland pic.twitter.com/pQS1IPV7iL

A guy uses a scooter to bash in the window before getting hit with what sounds & smells like pepper balls or some other kind of crowd control munitions #koin6news #pdx #pnw #Oregon #Portland pic.twitter.com/EuyXiYejjs

After trying to extinguish the fire DHS agents headed back into the building. The fire grows once again. pic.twitter.com/yoVUK4CESN

Gas or smoke canisters deployed by federal officers, pushing people off the property. Other officers have put out the fire. #koin6news #pdx #pnw #Oregon #Portland pic.twitter.com/KEZGZPc6Uo

Salmon Street in downtown Portland is filled up with teargas and smoke so thick that it becomes impossible to see. pic.twitter.com/iZnh9xdmL3

Scenes of chaos have returned at the heart of downtown Portland as federal officers mobilize to protect the courthouse after #antifa set it on fire. #PortlandRiots pic.twitter.com/ZBJGfSFCWR

I’m heading out but I’ll leave you with these four photos. pic.twitter.com/YB44wSFGnL

Gaurdian Angels Get Caught Filming Faces Of People Marching At The Stonewall Protest….The People React And Chase Them Into The Subway…Guardian Angels Work Alongside The NYPD, And The People Were Not Happy Being Filmed By Them. @AshAgony #BlackLivesMatter pic.twitter.com/CP3mF1HcXb

Earlier Thursday, there was a confrontation at the entrance to the federal courthouse, according to journalist Andy Ngo.

“F— the United States!” Antifa try to break into the federal courthouse in Portland. Federal officials just removed the barricades protecting the building after months of #antifa attacks on the building. Now they’re back again. #PortlandRiots
pic.twitter.com/vBq28J5skl

KING-TV reported, “Police said a group of people invaded the lobby of an office building” in downtown Portland on Thursday. “Officers arrived and found about 30 people refusing to leave, some smoking inside, some with pets,” police said in a news release. “The situation escalated when people began damaging property, including a television and the front doors to the building.” A Wells Fargo bank in Oregon’s biggest city was also attacked Thursday.

#Antifa and other far-left rioters in Portland tried to break into the @Chase bank. A lone security guard tried holding them back. He pulled out a pistol during the mob attack. #PortlandRiots pic.twitter.com/Sw3SU8PO0A

Just an idea Tifa attacked two banks in Portland yesterday before their siege attempts on the courthouse. This was Wells Fargo. They are big mad over some pipeline with the banks. pic.twitter.com/R8wlmayL04

The Portland police acknowledged that they are aware of protests planned for Friday and the weekend. “We are aware of events planned tomorrow and this weekend in which people plan to gather and demonstrate. Demonstration Liaison Officers (DLOs) are available to work with community members organizing these events,” the Portland police tweeted on Thursday. “DLOs work with event organizers to better ensure a safe environment for event participants and non-participating community members.” Ngo shared an alleged poster for the “Direct Action March,” that calls for “No Justice No Peace.” The poster also reads, “No Borders! No Nations! Abolish Deportation!” There is reportedly a warning from the protesters to the public “not engage with the demonstrators in any way, including yelling at them or filming them in plain view, as it may result in retaliatory action by the demonstrators.” Read Full Article