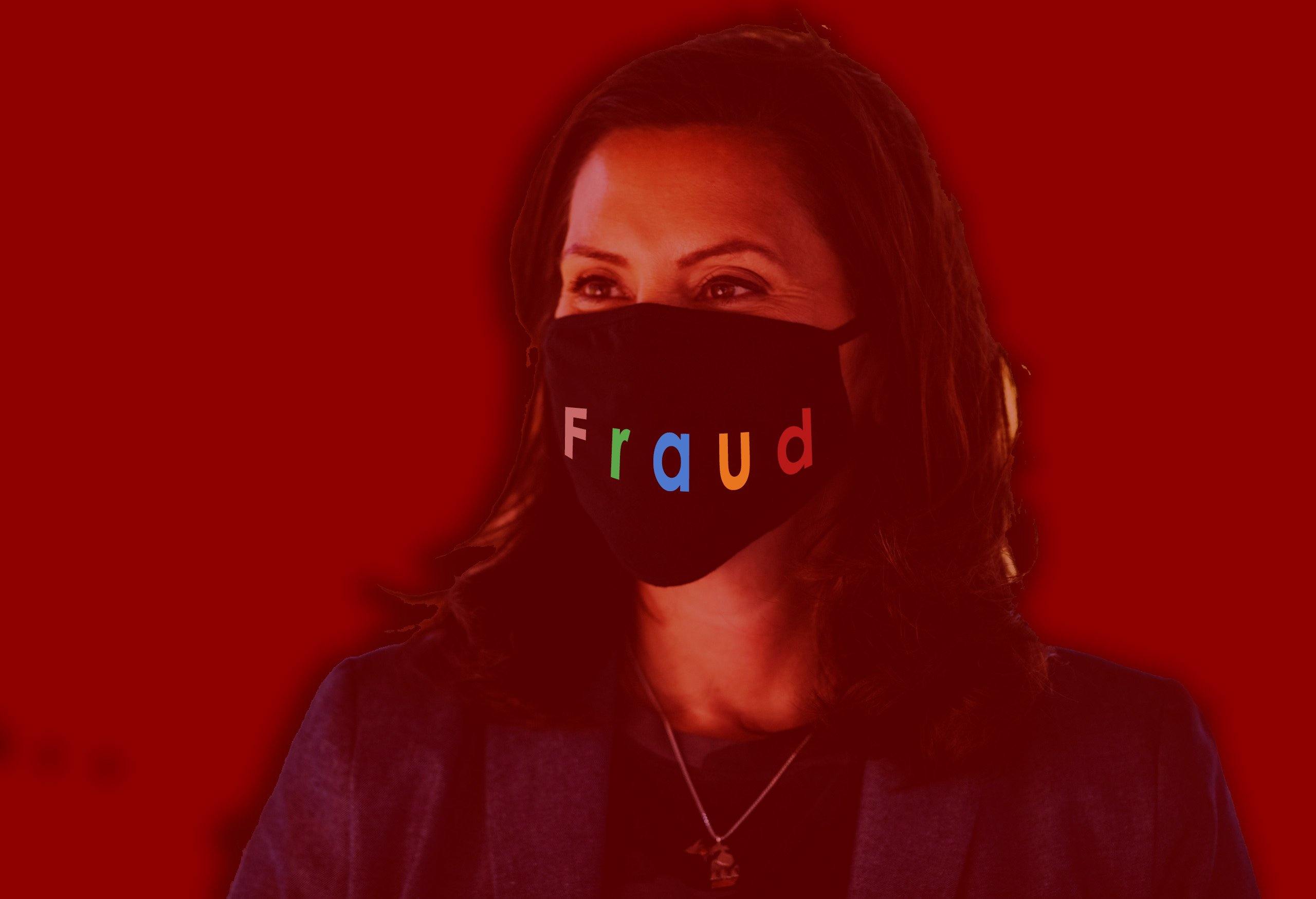 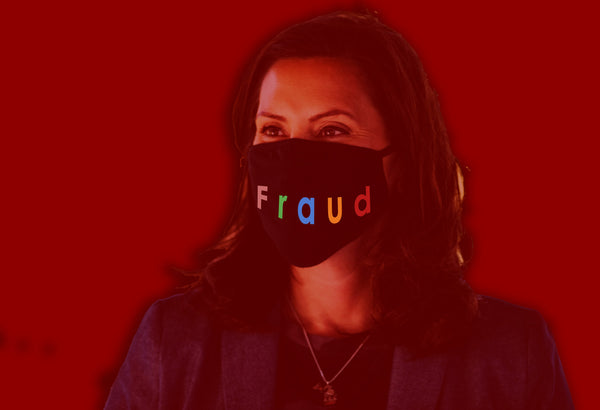 In my first report, I wrote about how I was in search for information related to public officials obtaining “kickbacks” for each Michigan unemployment claim that was approved.

Well, I did find an article that was put out by Breitbart that covered this exact topic.

An independent audit of the unemployment benefits system found the administration of Michigan Gov. Gretchen Whitmer (D) paid up to $1.5 billion in “fraudulent” claims.

Fox 17 reported on the investigation of the Michigan Unemployment Insurance Agency (UIA) conducted by Deloitte: “The company interviewed 24 UIA and Department of Labor and Economic Opportunity (LEO) personnel including executive leadership. They reviewed documents, emails, charts, polices, and federal and state UI guidance.”

On May 27, 2020, UIA estimated that $1.5 billion of higher-risk claims (claims that otherwise may have been detected by Fraud Manager) had potentially been paid prior to running through Fraud Manager. Additionally, UIA had identified multiple instances of potential internal fraud by UIA personnel and contractors using their access to UIA procedures and systems to fraudulently approve/disburse millions of dollars in federal and state UI claims to ineligible claimants in exchange for payments and kickbacks.

At first, I was a bit taken back by this report.  That Deloitte, a company that  has been tied to multiple accounts of fraud, money laundering and pump and dump scams, has actually alleged that Governor Gretchen Whitmer’s office (Michigan Unemployment Insurance Agency) was receiving kickbacks for each unemployment claim that was granted.

Then I got to thinking, this must be a diversion tactic?  A purposely focused smaller event created to divert attention away from the larger event that’s really unfolding?  I have a strong feeling that is what is actually going on here!

I think we need to perform an audit on the auditors to see what is really going on behind the scenes!  Why is a private company, based in London England as well as Beijing / Wuhan China handling the financial affairs for the State of Michigan?

Do you remember this letter from the Michigan Department of Labor and Economic Opportunity? 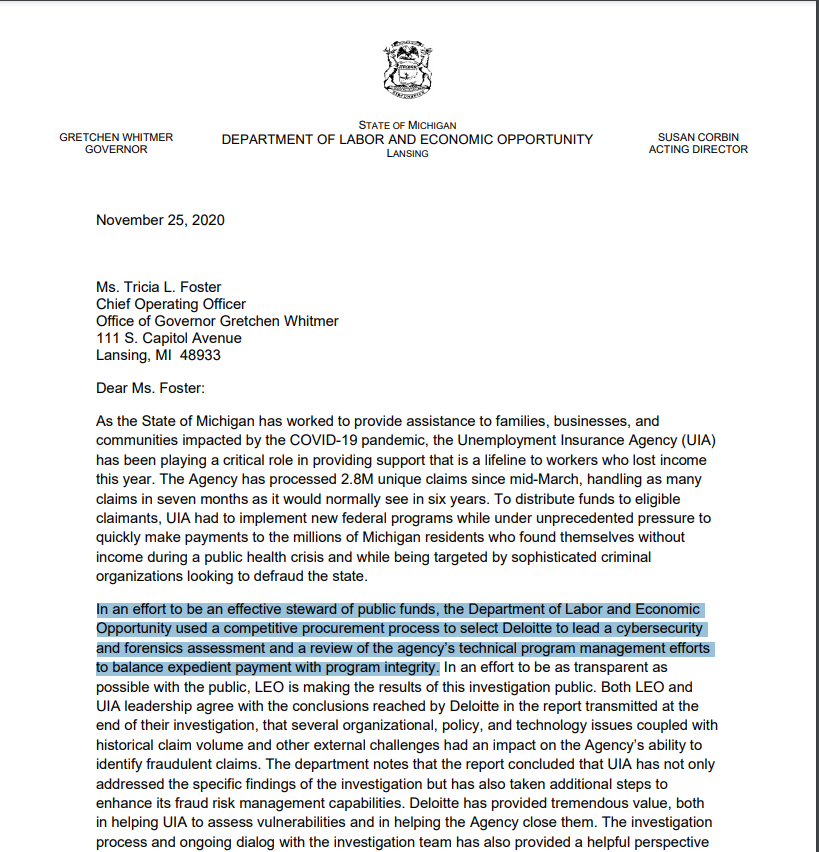 Here we see quite a contradiction with what is really going on…   Let’s look closer at this letter:

Deloitte is extremely expensive!  Why buy Gucci when you can only afford Walmart?

State governments struggling with the coronavirus pandemic have paid tens of millions of dollars to big consulting firms for help.

The consultants promised to help the states tackle a range of problems, including delivering medical equipment and staffing call centers that handle worker benefits. In some cases, states have seen only modest benefits, if any at all, for the extra cost, The Wall Street Journal found through interviews and public-records requests.

Two major consulting firms, McKinsey & Co. and Deloitte Consulting LLP, together have won coronavirus-related contracts worth at least $182 million from states, more than double their tally of federal coronavirus contracts, according to a Journal analysis of public records and news releases.

The full amount of money received by the firms is likely even higher—comprehensive data on states’ spending isn’t yet available.

And now, the State of Michigan Unemployment Insurance Agency is being directed by Deloitte to demand all money back from people who were receiving unemployment benefits!  So not only has this group carried out 1 fraud, but 3!

1. Kickbacks for Unemployment Insurance Agency on how many cases were processed and approved.

3. All claims that were approved are now being considered “Not Eligible” and the state is demanding all money be returned from people who filed for unemployment.

THIS IS TRIPPLE DIPPING!

Another question is, why isn’t anybody doing anything about this lawlessness being carried out against the people of the state of Michigan?  Tax payer money is being stolen!

Too many questions and not enough answers!  We are being lied to, ripped off and laughed at!