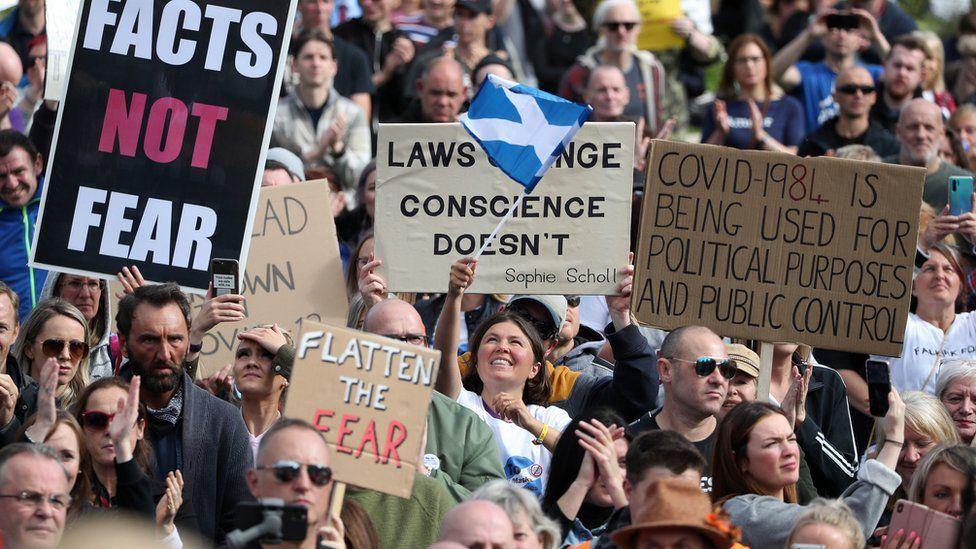 Statement from the constabulary regarding yesterday’s anti-lockdown protest in London. #COVIDIOTS pic.twitter.com/9sPu88yWMZ

The censorship regime is beginning to flex its muscles and put blackouts on large world events.

There was a huge anti-lockdown protest in London on Saturday that the media seems to have put a complete blackout on.

The British media vaguely mentioned it, but claimed there were “hundreds.”

You can check the clips and see if you would estimate this as “hundreds.”

This is by far the BIGGEST UK protest I have seen. They will not be able to police these crowds. #RightToProtest #londonprotest #lockdown2021 pic.twitter.com/w6MbYpBMWT

Odd no action by the police in relation to this anti-lockdown protest. Maybe they only feel safe piling in on peaceful women. pic.twitter.com/IeYY632Syv

We the people have the power. We the people can stand up for our freedoms. We the people are more connected and loving and braver than we ever believe. Today is the day we change history. For the better.#worldwidefreedomrally #WeWillALLBeThere pic.twitter.com/iK6WdnnOMo

“Stop destroying our kids’ lives”
Huge crowd shuts down traffic in central #London at anti-lockdown protest. The UK has been in strict lock down since December. pic.twitter.com/UwVxjrwi1i

COVID-19: Anti-lockdown protests in London as MPs call for restrictions ease for campaigners
MPs warn that allowing the police to arrest people for protesting “is not acceptable and is arguably not lawful”. pic.twitter.com/dWtGFaDvS5

On Sunday night, in Bristol, people really started rioting hard, and attacked cops, burned cop cars and smashed up a police station. This spun out of a protest against a bill to ban protesting. It was not an anti-lockdown protest, and it was pocked with diversity.

Disgusting scenes in #Bristol tonight. I’m sick and tired of seeing the police coming under constant attack in this pandemic. Our cops are some of the best in the world – give them a bloody break.

But there was likely some overlap with anti-lockdown people, as that is who the anti-protest bill is targeting.

These images are worse than anything we saw in the UK during last summer’s Black Lives Matter riots. It looks more like America’s 2020 riots. There are a lot of whites here.

Again, this was not specifically an anti-lockdown protest, it was a protest against a new law the British Parliament is introducing to ban protesting, because they now claim it spreads the coronavirus. You will recall that last year, the entire world agreed that protesting does not spread the coronavirus.

In Germany on Saturday, anti-lockdown protesters fought the cops.

There were also anti-lockdown protests in other European countries over the weekend, some of which appeared quite large, and none of which were reported on widely by any international media other than RT. Netherlands:

“All of you can stop this, lose the helmets. So many police in the world have done so already. Join us. Throw off your helmets. Put down your batons. We take care of our fellow man. Take care of us, too.”pic.twitter.com/1K7Wh0BjBc

Huge protests in Belgium too as the world unites against Coronavirus tyranny. #WorldWideFreedomRally pic.twitter.com/Q9reaY09r2

There is a genuine populist revolt forming across the Western world, as fewer and fewer people are believing in this idiotic hoax.

Seeing the media cover this up is crazy. All they have to do is ignore it, and no one knows it’s happening. This is what I warned of – that in this new age of total information control, large and important events can happen in public, and no one will know about it unless they saw it themselves.

Of course, such and such media did report on it. If you live in Britain or Germany, you probably heard about the weekend protests. But this is not a front page news story on any of the big international sites, and the British media (I don’t know about the other countries’ media) are not making a thing of it.

We are in a transitionary stage right now. You’re going to see more countries pushing for banning protests, and people will then start lashing out, and that’s when the media will totally lock it down.

Apparently, there isn’t a plan to give people a lockdown breather over the summer, so that means people are going to be protesting. You will watch a process play out where Anthony Fauci and these people start warning about protests, and then the police start really beating on people, and then you will just stop hearing about it.

The remaining ability to post things on social media will be gone. If you check back here a year from now, all of the tweets I’ve included in this article will have been deleted. We are entering into total information control.

If the events in Bristol are any sign of things to come, people are going to start getting violent soon. That was bound to happen. We should understand that this is all part of the plan. This is all scripted. It was all written out before you ever heard the term “coronavirus.”

However, always remember: the future is not written in stone. It hasn’t happened yet. Just because their plan has come together so far doesn’t mean it is destiny.

I’m not sure that they expected this much pushback.

2021-03-22
Previous Post: Antifa Terrorizes Lansing, Again Nobody Is Doing Anything About It!
Next Post: Krispy Kreme Offers Free Donuts To Vaxxers!