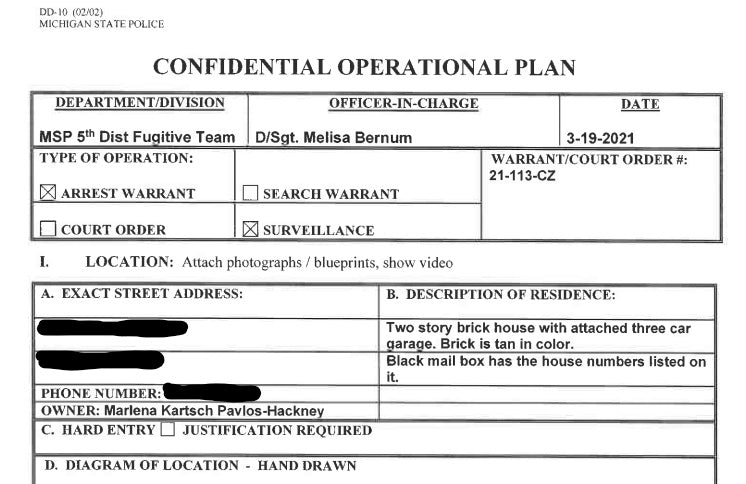 MICHIGAN- Contained within email correspondence (FOIA) between the Michigan State Police (MSP), the Attorney General’s (AG) office, and the Michigan Department of Agriculture and Rural Development (MDARD), it appears the officials were grasping for straws, or rather searching for a loophole in the law on how they could go about arresting Marlena Pavlos-Hackney, a restaurant owner in Holland.

On January 20, 2021, MDARD suspended Hackney’s food establishment license for remaining open during the State mandated lockdowns in 2020. MSP admits to staking out her home and restaurant, and began to surveille at 4am the day of her arrest on March 19th. See below the MSP’s timeline prior to Hackney’s arrest: 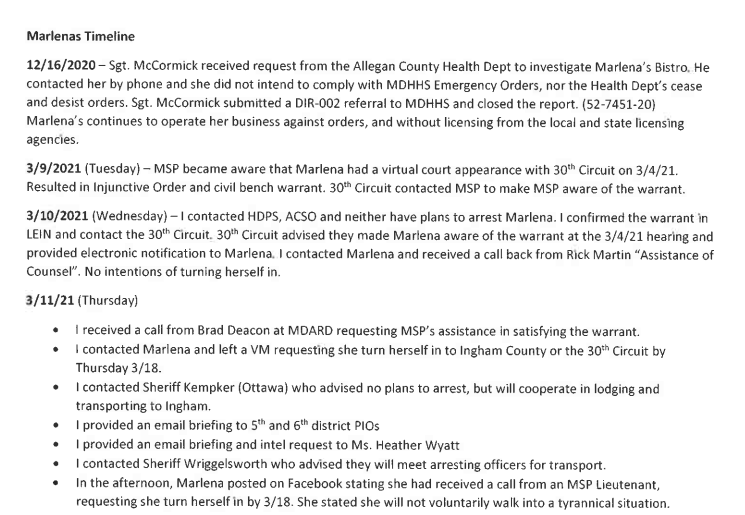 Hackney refused to shut her restaurant down and was arrested during a traffic stop on the way to her restaurant on March 19th, 2021, on the grounds of “civil contempt of court” for not showing up to a hearing in Ingham County on March 4th, in which Judge Wanda Stokes issued a bench warrant. See below the order for Hackney’s arrest below: 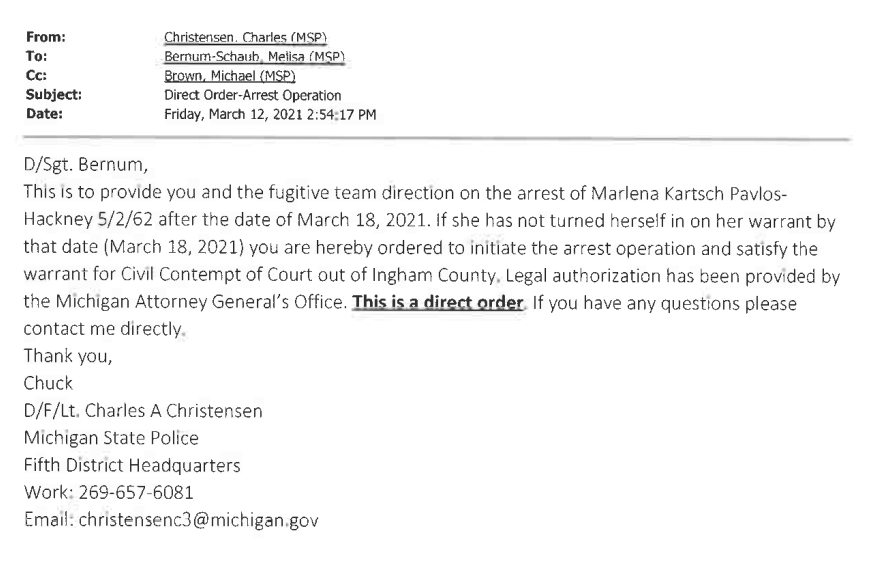 We received the Freedom of Information Act (FOIA) obtained by Hackney’s attorney. It’s pretty eye-opening how often police and state agencies access social media accounts. The MSP had shared fliers and links to the fundraiser/rally that was held when Hackney’s restaurant was shut down back in March, along with social media posts. MSP also had photos of Hackney, her husband, and Rick Martin (Hackney’s assistance of counsel), along with photos of Hackney’s home, business, and vehicles of anyone who may have been involved.

Here are a couple examples: 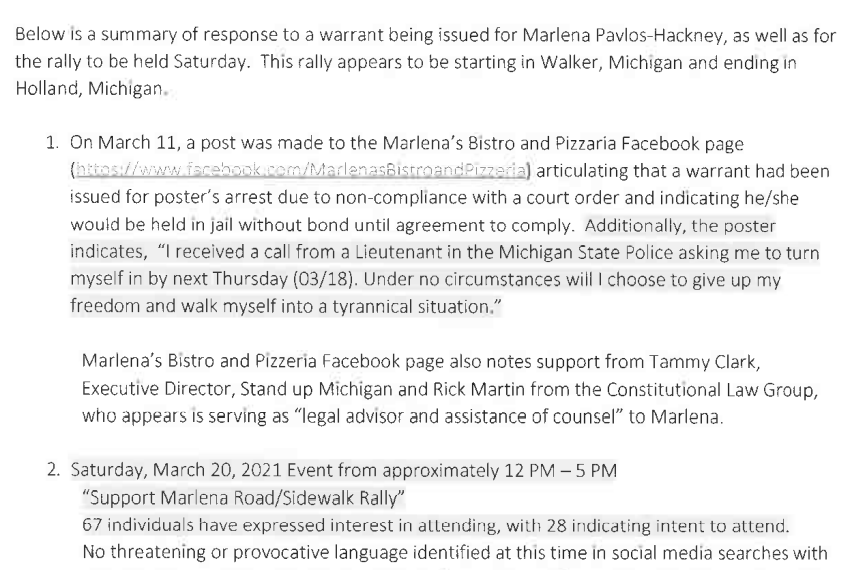 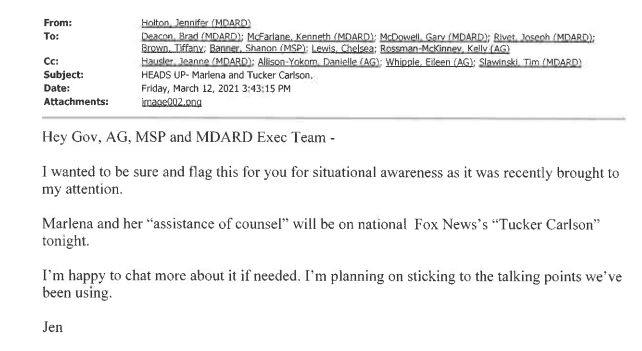 As we can see, MSP is using measures to surveil social media platforms, in order to obtain information to conduct a fraudulent arrest.

MSP also setup a press release one week prior to the arrest, to help with damage control. It’s pretty disgusting how much time, resources and tax payer money was wasted on this entire ordeal. All to make an example out of Hackney, and instill fear into any other business owner who chooses to make a stand against tyranny.

Here is the preemptive news release: 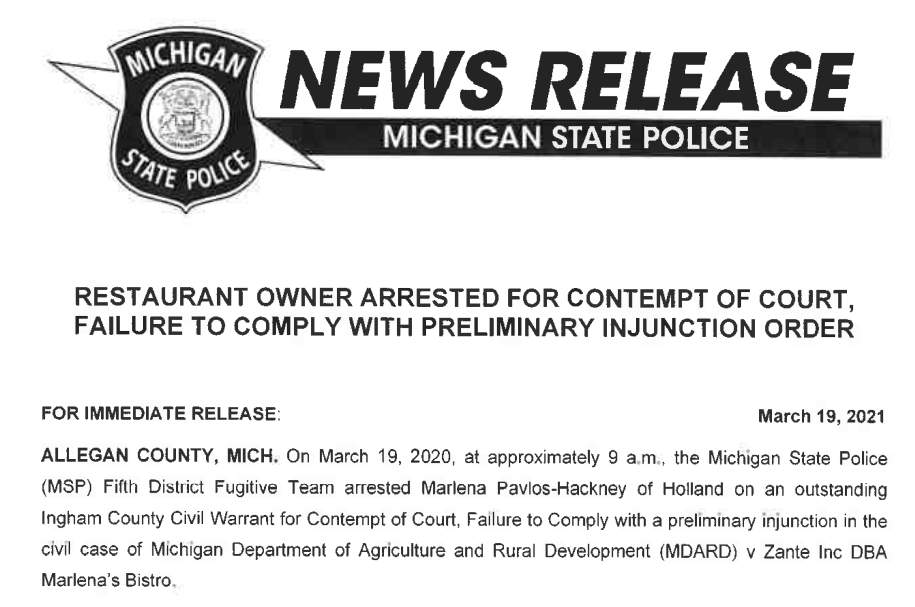 The Mackinac Center for Public Policy also obtained email exchanges after filing a FOIA from the local police departments and the AG. It had sought documents related to Hackney’s case. The Michigan Capitol Confidential, which is the news source for the Mackinac Center for Public Policy, wrote back in June. We noticed prior to them sending a FOIA request, the MSP and AG dodged emails from Tom Gantert of the Michigan Capitol Confidential by replying to him with the following:

“The Michigan State Police has its own policies and procedures, which were followed in this instance”

“Pavlos-Hackney, 55, Holland, was taken into custody by the Michigan State Police (MSP) today at 5:45am on an outstanding Ingham County civil warrant for contempt of court, for failing to comply in a civil case filed by the Michigan Department of Agriculture and Rural Development”

To go further into the correspondence, an email between Eileen Whipple, the assistant Attorney General and Steven Beatty, an attorney for the Executive Operations Bureau of the MSP states that it’s unlawful for the MSP to arrest Hackney unless it’s an order coming from the AG or Governor.  However he suggests,

“While I think I know the direction you are likely to provide, could you please confirm that the office of the Attorney General is directing us to assist in the execution of this arrest warrant in this MDARD civil matter.”

The email from Beatty suggests the only way MSP can take direction in order to execute an arrest warrant is for MDARD to connect with the Governor or the AG. If you see below, MSP is figuring out which of the Michigan Compiled Laws can apply and make this arrest legal: 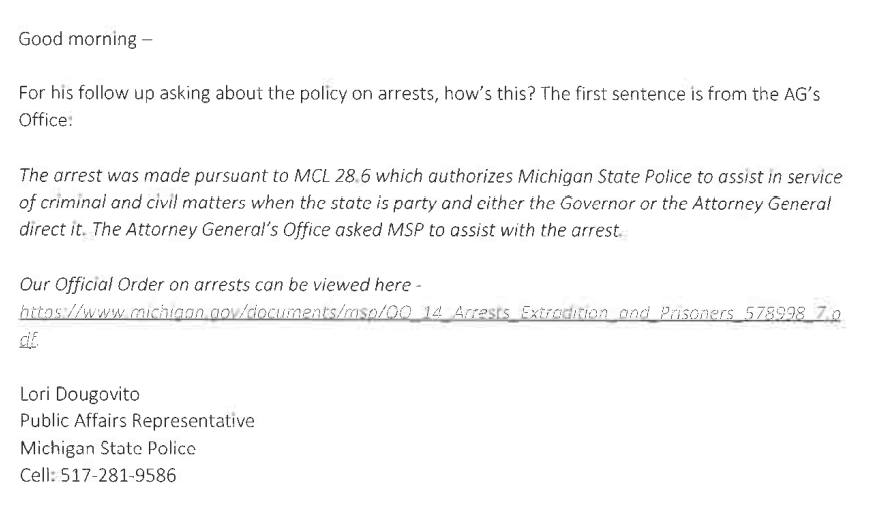 The surrounding counties refused to arrest Hackney due to the COVID restrictions in place at the time. 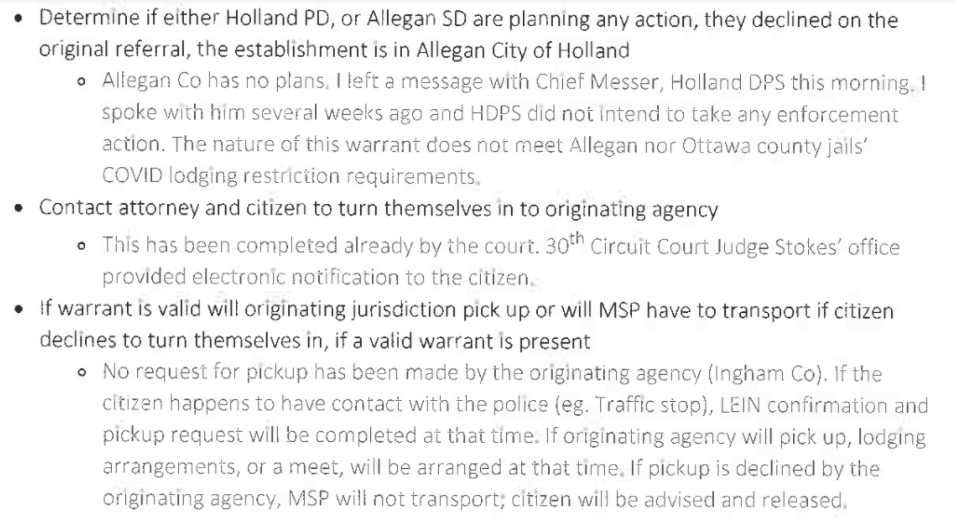 The email from Beatty suggests the only way MSP could take direction in order to execute an arrest warrant was for MDARD to connect with the Governor or the AG.

So MSP and MDARD decides to weaponize themselves and turn a civil matter into a criminal contempt warrant because she failed to show up for her initial hearing, and throw her in jail until she complies and shuts down operations at her restaurant.

But why didn’t the AG and MSP go thru ALL the restaurants in Michigan that refused to shut down? The prisons should be FULL of hard working mom and pop owners, right?  But this was all an obvious show, to keep other business owners from standing up against tyrannical and unjust orders.