LIVINGSTON COUNTY- Mike Detmer today announced he will be running for state senator in the 31st district, versus congressman (district 5 now, formerly 8th) in the 2022 election. This will match him directly against incumbent Senator Lana Theiss (R).

Detmer made his announcement today at 2pm in front of the Livingston County Courthouse where friends, family and constituents gathered.

Mike Detmer grew up near Traverse City where his family owned a real estate company, and a Christmas tree farm where he would work when he was not in school. He attended Oakland University where he studied political science and served as President of the College Republicans. Mike graduated in 1998 with a Bachelor of Arts degree. Read more about his story here.

Mike’s journey began around two and a half years ago, after the 2018 election. He states that was the “spark” for him as a working guy. “I’m running because I’m fighting.”

The two biggest items on his platform are:

“The incumbent hasn’t been that bad, but she missed the mark on these issues.” and that we are in a “crisis point in our state and country” says Detmer. He also wants to work on stopping mandates, critical race theory is schools, help fix the infrastructure and roads, and supports second amendment rights. He also supports a full forensic audit, and wants an immediate termination to the Dominion contracts within the State of Michigan. 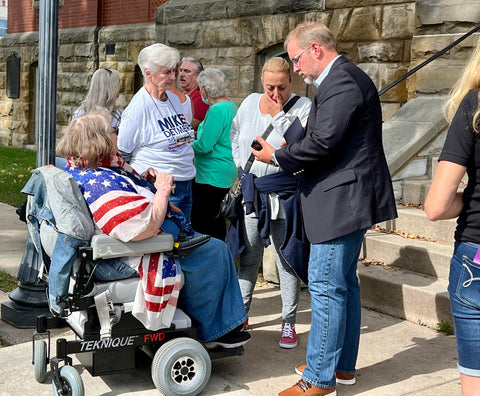