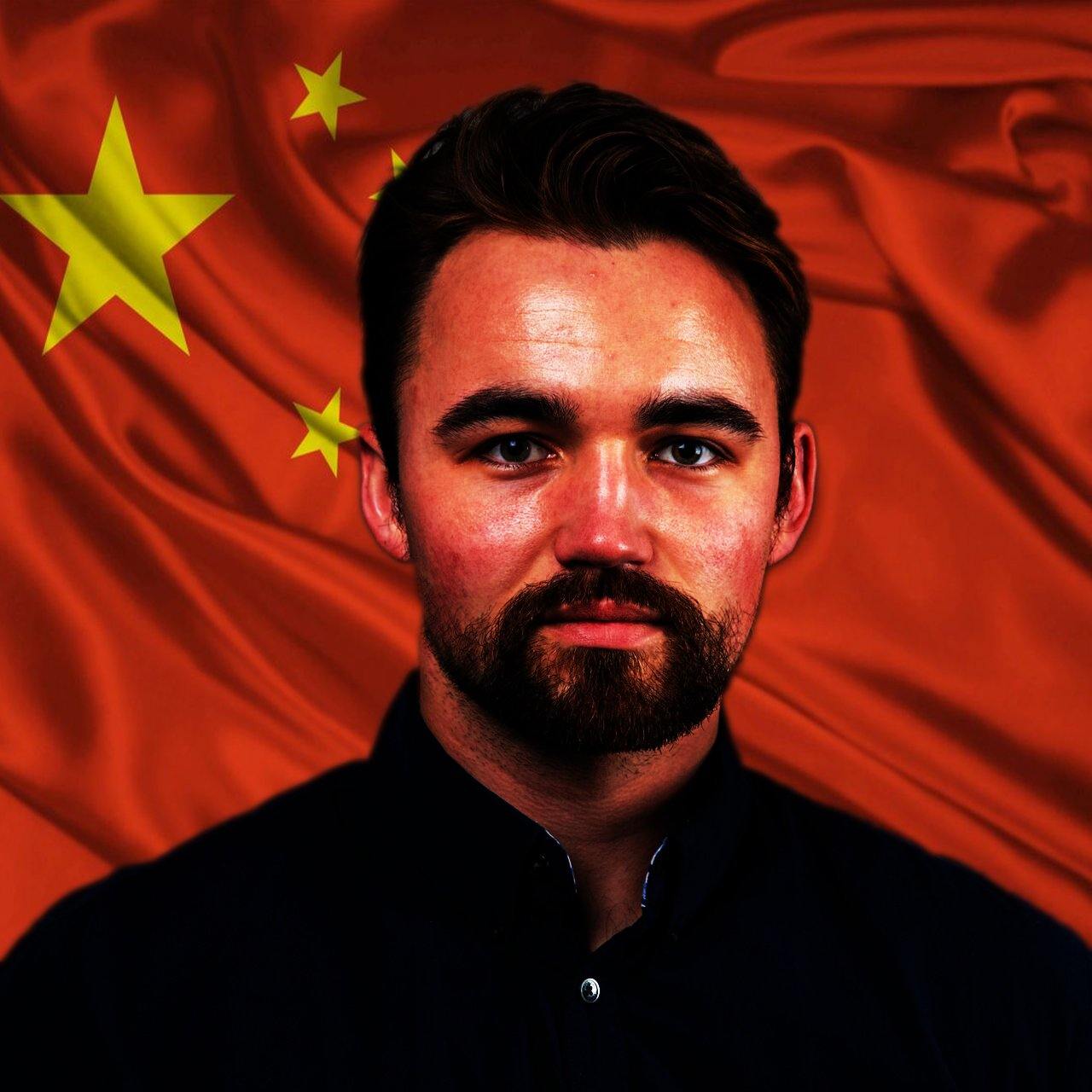 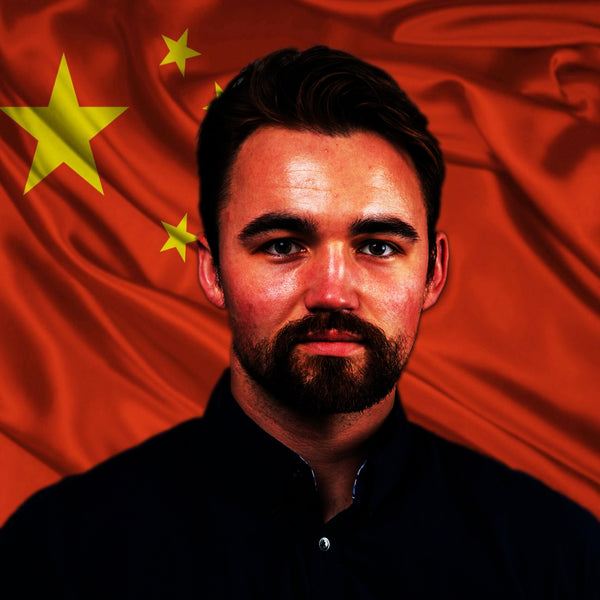 While attending the Marlena Pavlos-Hackney protest at the Ingham County Sherriff’s Office, I spoke with Mr. Barrett about the Deloitte / Michigan Unemployment Scandal, in which he seemed very interested in the facts!

That a foreign based company being tied to multiple counts of fraud as well as pump and dump schemes was contracted to audit the Michigan Unemployment Fraud.

Mr. Barrett then instructed me to email or text the story that I had written to him and he would pass it on to his editor to see if they could do a story from my article.

I mean, what media publication wouldn’t want to report on something this big?

I was also kind of relieved to see that Mr. Barrett was not wearing a Covid Muzzle like most media personnel here in Lansing do.  Maybe this guy actually has some common sense huh?  Or, maybe it was just his wannabe new patriot beard he is now sporting that prevents any type of M-95 mask from fitting properly?

Sad to see that he reports the opposite!

“A small group of individuals use your platforms to downplay the dangers of COVID-19 and spread misinformation about the safety of vaccines. These individuals lack medical expertise and are often motivated by financial interests.” https://t.co/VyymPzoCWS

During our conversation, he seemed to be intelligent and receptive to the information I was giving him.  He was actually giving the expression of complete shock and utter disbelief to some of the things I was revealing to him about Deloitte and Michigan Unemployment.

Weeks went by and MLive has mentioned absolutely nothing about Deloitte’s involvement with fraudulent activities. I mean, we all pretty much know how the media refuses to report actual facts anymore, so this had me thinking;

WHY NOT? THIS IS A HUGE STORY AND IT IS NOT BEING COVERED BY LOCAL MEDIA!

So, my intuition led me to looking at Mr. Barrett further, to see if he actually did have any intention of passing my story on to his editors. Or if he was just blowing smoke up my arse.

What is his perspective on politics?  Mr. Barret is “Reporting Michigan politics for @MLive“

I was able to locate Mr. Barrett’s Twitter Page and started reading how left this guy really is!

Here we see how he has a lot of hatred towards Republican Ryan Kelley who is running for Michigan Governor!

.@samueljrob and take a deep look at a West Michigan planning commissioner who participated in the Capitol siege and announced a campaign for Michigan’s top office. Ryan Kelley spent the last year organizing right-wing outrage and embracing militias.https://t.co/303npCxpcC

Kelley has claimed he’s faced racism from others over his support for the controversial monument. Kelley said removing the Civil War statue would lead to the destruction of churches and religious iconography, and BLM wants to “rip down all statues of Jesus.”

Kelley is a real estate agent and lifestyle vlogger who had virtually no government experience before getting in the middle of Michigan’s political battles. In Allendale Township, he defended a Confederate monument that “isn’t all that valuable to me.”

Residents said the fight over the monument emboldened racism in the community. They call Allendale a “sundown town.” Armed militias and Confederate flags appeared, putting Black residents on edge.

At least 7 of the 14 men arrested for plotting to kidnap Whitmer attended Kelley’s events. Immediately after their arrest, the APC experienced a big boost in traffic to its webpage and social media accounts. Kelley denounced them but speculated they were treated unfairly.

If anybody is aware, there is a hate group that continues to Dox people illegally on Twitter! The group is named Michigan Tea and Mr. Barret is tied in with this group!  How? 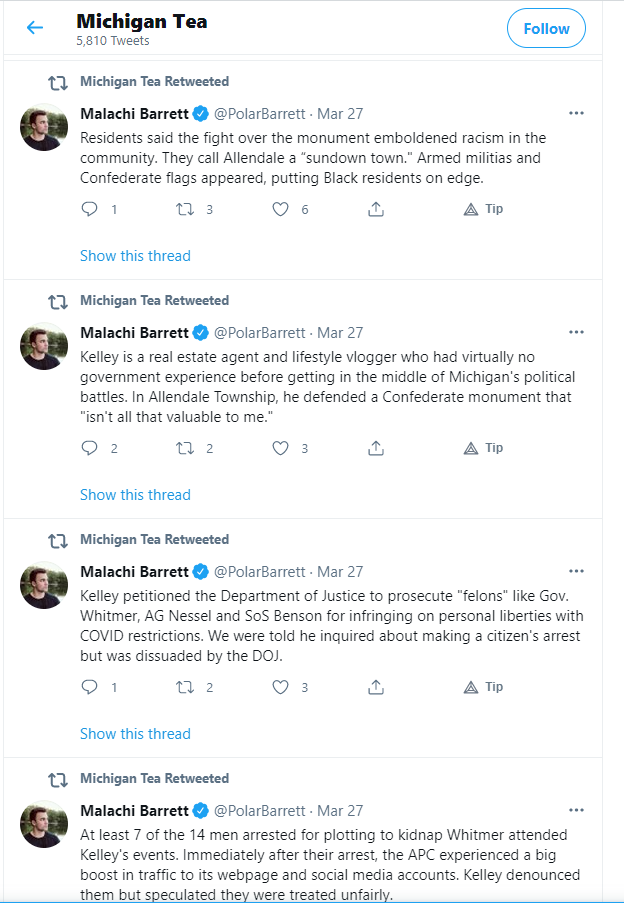 Also, I reached out to Mr. Barrett via text message this morning to try to get a comment; 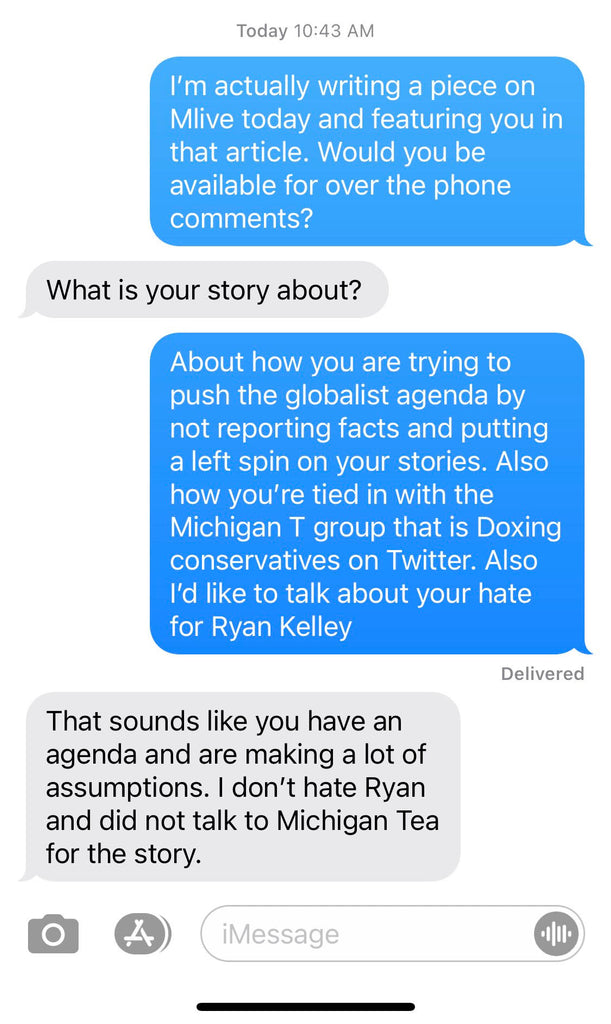 I misspelled Michigan T using a T instead of TEA.

Thankfully, somebody who does not associate with Michigan Tea like Mr. Barrett, was able to correct that for me. How does he know how to spell it?

I also said I would like to question him about his involvement with Michigan Tea and he replied:

“and did not talk to Michigan Tea for the story.”

That is not what I asked and a poor way of deflecting. No wonder your reporting skills are jarred to the left, when you cannot even answer a question correctly…

Michigan Tea consists for a conglomerate of local journalist who are doing what they can to push the globalist agenda. Steve Neavling with Detroit Metro Times is also a part.

And furthermore, I do have an agenda!  My agenda consists of Exposing Fake News and Hate Groups! I also expose Tyranny In Government and try my best to share Real News.  I also Defend Liberty and Freedom because I Love My Country!

I am just a “wannabe reporter” who is actually taking the time to research and report actual facts… ????